Director Bruce Guthrie had never seen RENT before tackling the 20th anniversary production, opening at London's St James Theatre next week. What does he think of Jonathan Larson's legacy and his cast of #StageFaves giving the show new life? Musical Theatre Review's Rebecca Gordon interviewed him...

After a limited season at Theatr Clywd in Mold, this brand-new production of RENT, Jonathan Larson’s ground-breaking American musical, which famously opened on the night that Larson died prematurely, has embarked on a three-week tour prior to a Christmas season at London’s St James Theatre where it has already broken box office records.

I heard that you’ve never seen a production of RENT. How did this impact you?

I am coming at it with a fresh perspective. I am a huge fan of the book and a huge fan of the music so I tried to approach it as if it was a brand new musical. I was lucky enough to go to New York City before we started rehearsals and meet a lot of the people who were involved in the original production; people whose situation had inspired certain moments in the production or were friends with Jonathan Larson.

What was the most surprising discovery you made when you were in New York doing this background research?

I don’t know if this is surprising, but I was struck by how much was drawn from personal experience and the people around him. ‘Seasons of Love’ is a collection of lyrics drawn from Jonathan’s friends. He called them up and asked them: “how would you measure a year?”

As a director, what are the challenges of developing a new production of Rent when people have strong opinions on what the musical is supposed to do?

It’s a massive challenge. We don’t have the luxury of having the writer in the room, which is an unfortunate thing. I would have enjoyed meeting Jonathan. It is superb writing. He pays absolute respect to La bohème while making it very much his own thing and a product of its time…incredible qualities to have. I think the cast has brought so much to it. They are all young, incredibly talented, 15 fresh imaginations. They approach the work from a very emotional point of view with a great amount of respect and integrity.

It’s never about ego or what has gone before. It’s allowed a young group of actors to flex their creative muscles. 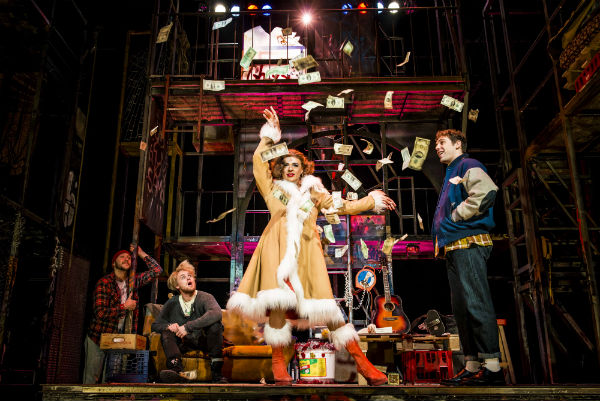 How do your actors surprise you?

They surprise me every day. Layton Williams [as Angel] is an extraordinary performer. His relationship with Ryan O’Gorman, who plays Tom, is really, really special. Lucie Jones [Maureen] is an incredible vocal talent as well as Shanay Holmes [Joanne]. The way that they have built up the relationship is extraordinary.

Billy Cullum is the guy who holds everything together, and with his Mark, he totally gets the Brechtian breaking of the fourth wall and ensures that the audience keeps up with everything – he’s wonderful. And then you’ve got Ross Hunter, playing the role of Roger. He has the most extraordinary rock voice and finds new depths within the character every day.

Philippa Stefani, who plays Mimi, brings a wealth of talent and depth of emotion to a character who really struggles with life on a daily basis. Pip gives something up of herself with every performance and the audience really responds to that.

Then you have Javar La’trail Parker [Benjamin]. It takes a tremendous amount of courage to be someone who is prepared to not be liked – that’s a very difficult thing to do. They’ve done an extensive amount of research to give these characters authenticity because otherwise the audience doesn’t buy it.

Read the full interview - including what Bruce would ask Jonathan Larson if he were alive today - on musicaltheatrereview.com...