Frances Ruffelle has one of the most idiosyncratic voices of any singer in the West End or Broadway. Hers is a husky, sultry sound, with an unmistakeable rawness and vulnerability that is sure to make her the perfect fit for the role of Queenie in composer-lyricist Michael John LaChiusa’s version of The Wild Party. 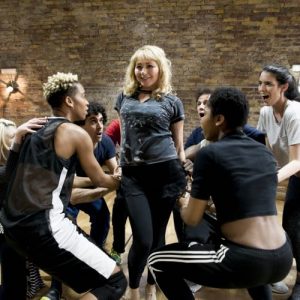 The hedonistic, seven-time Tony-nominated musical – with a book by LaChiusa and George C. Wolfe – recounts the events of one fateful night in the life of Queenie and Burrs, fading vaudeville stars who throw an outrageously decadent and gin-fuelled party in order to save their relationship. This is a show of firsts: it’s the UK premiere, the first production for the former St James Theatre under its new guise as The Other Theatre, and the first for artistic director Paul Taylor-Mills (Carrie, In The Heights). Directing and choreographing the show is Drew McOnie (In The Heights, Strictly Ballroom).

The daughter of Sylvia Young – she of the famous acting school – and the mother of pop star Eliza Doolittle, the waif-like ‘Frankie Ruff’ is enjoying a long, glittering career as a performer and creative. She most famously originated the English-speaking role of Eponine in Les Misérables, which she took to Broadway, winning the 1987 Tony for Best Featured Actress in a Musical, and now lives between London and New York, performing regularly in both cities.

Back in London, during a break in rehearsals in a space above the refitted Union Theatre, ‘Frankie’ took 20 minutes out to speak to Musical Theatre Review’s Craig Glenday about her excitement at bringing Queenie to life in the capital.

How have rehearsals been?

Well, exhausting, but it’s really, really exciting in the room. I haven’t actually been so excited in a rehearsal room for a long, long time. It’s lovely.

Did you know score before you started?

I know the piece really well, yes. But only from listening to it. I came across it about 12 years ago, I think, and fell in love with the music. When I heard the album, I was thinking ‘Wow, this is not just a musical, I would almost say a jazz opera’. It’s got jazz and classical influences, and the way it’s written is very challenging. It’s an amazing score. Now, with Drew’s touches – and I don’t want to give away too much – but my gosh! There’s so much incredible choreography now. I was mesmerised by the album and now I’m mesmerised by Drew’s vision.

So what’s the story then?

It came from a poem [Joseph Moncure March’s narrative poem of 1928], which was banned because it was very naughty. It’s about a wild party, and it’s wilder than any I’ve been to…

I’m sure that’s not true! 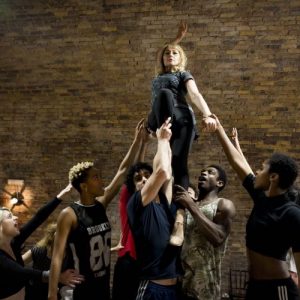 …and that’s saying something! Basically, it’s 24 hours in the life of Queenie, a vaudeville queen in 1929. She would rather she wasn’t a vaudeville queen – life didn’t quite go as she wanted it – so she gives herself a bit of excitement. She likes sex, she likes drugs, she likes alcohol, she likes partying. It’s really just taking her away from a life that she really feels unsatisfied about.

The characters in the piece were a big part of what drew me to this show. The characters are so dynamic, and a bit unsafe, really. Vulgar. Everything that could happen, happens. An incestuous relationship between two brothers, and then there’s gay love triangles, straight love triangles, partner swapping, drug taking, guns, misogamy. It even touches on paedophilia. It’s quite dark.

Don’t take this the wrong way, but do you feel an affinity with this character?!

I do in a way. The reality is, sometimes life doesn’t always go the way you plan it. I can’t say I’ve had a bad life… I’ve had a lovely life, and am having a lovely life. There were disappointments, and I know the feeling sometimes when you just get to the end of the day and you’re having a bit of a low. You know, you get the lows sometimes in this business, and you do just want to do something that makes you feel happy. Opening a bottle of wine, going out…whatever it is. I do have a lot of friends as well that suffer it in a very big way. I’m sure a lot of people identify with this character. I’m sure most people in the world aren’t doing what they really would like to do.

But you are? Is your career going where you want it to?

To be honest, I noticed at quite a young age that when things weren’t going my way, I got pretty low. I found a way out of that, and that was to be creative. I write, I put my own shows together, I direct now. Just keep creativity going, and it’s not just in showbusiness – I’m pretty obsessed with property and interiors: I do up houses and people ask me to do theirs for them even. I have other obsessions to do with art and creativity, and I keep myself going. Actually, I don’t really just rely on acting as an income any more. I’ve made other things work in my life. I would love to be able to just do the most challenging roles all the time, but they don’t always come along. I’m quite good at choosing things that challenge me. Otherwise I know I have a low boredom threshold! I get bored very easily, so I have to challenge myself all the time.

You had some big roles early on in your career: Dinah in Starlight Express, Eponine in Les Mis…

Yeah, with Starlight Express I worked Trevor Nunn, so that’s what got me Les Mis. Actually, I had a really busy early career. I did my first West End show when I was 16, in the same theatre that I’m doing The Wild Party; before they knocked it down and it became what it is now, it was called the Westminster Theatre. I was 16, and I did a children’s musical there called Gavin and the Monster. When I was 17, I did a play [Terence Rattigan’s The Sleeping Prince] with Omar Sharif at the Theatre Royal Haymarket, and then while I was doing that, I was rehearsing for Starlight Express....