The Hope Theatre in Islington is best known for its acclaimed play productions. But, as its artistic director Matthew Parker turns his attention to the rarely seen Bryony Lavery musical HER ACHING HEART and brings onboard a West End co-producer, we wonder: could there be more musicals, and more transfers on the cards?

Grab a bonnet, lace up your corset, and prepare to swoon, as this tongue-in-cheek musical whirlwind parodies the best in bodice-ripping romance. Innocent maidens and haughty aristocrats ardently pursue each other through a tempestuous, gothic landscape, replete with murder, elopement and heaving bosoms a-plenty as two heartbroken women jump between the pages of the same bonk-busting paperback – and play all the parts between them!

Andrea Leoncini, producer for LWL Entertainment said: “Director Matthew Parker has established his theatre as one of the leading lights of the London Off-West End theatre scene, and we’re excited to support him in this 25th anniversary production of Lavery’s musical.”

HER ACHING HEART will feature original music by Ian Brandon (Notes From My Shelf, Big Bruvva, On Our Street). The production is designed by Rachael Ryan, with lighting by Tom Kitney and sound by Paul Freeman.

The Hope Theatre is an award-winning 50-seat venue above the world-famous Hope & Anchor pub on Islington’s Upper Street. A place for audiences and companies to explore big ideas, the venue nurtures and supports exciting companies to present a mix of new writing, lost gems from well-known writers, re-polished classics and innovatively staged musicals. 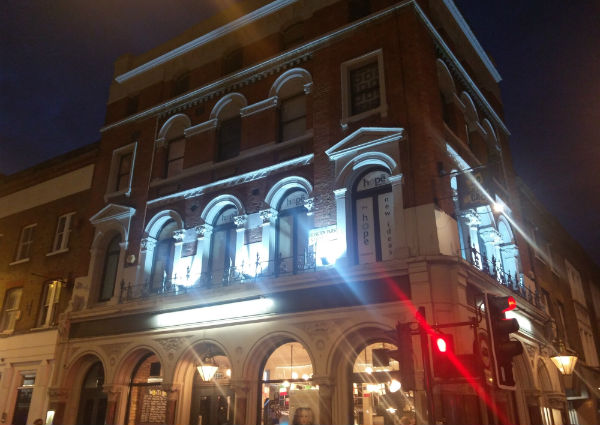 The Hope Theatre in Islington

HER ACHING HEART is the third 2016 in-house production at The Hope, following Sea Life by Lucy Catherine and Steel Magnolias by Robert Harling, also helmed by artistic director Matthew Parker, whose other hit Hope productions include Lovesong of the Electric Bear, which last year transferred to the West End’s Arts Theatre, starring Ian Hallard.

The Hope Theatre receives no public subsidy. It was the first Off West End venue to open with a house agreement with Equity, to ensure a legal wage for all actors, stage managers and box office staff working at the theatre.

Bryony Lavery’s plays include Her Aching Heart [Pink Paper Play of The Year,1992], A Wedding Story, Last Easter, Smoke, Dirt and More Light. Her play Frozen, commissioned by Birmingham Repertory Theatre, won the TMA Best Play Award, the Eileen Anderson Central Television Award and was then produced on Broadway where it was nominated for four Tony Awards. Stockholm, for Frantic Assembly, won the Wolff-Whiting award for Best play of 2008. Beautiful Burnout for The National Theatre of Scotland and Frantic Assembly received a Fringe First at Edinburgh, before performances in the UK, New York, Australia and New Zealand. Stage adaptations include: 101 Dalmatians [a musical] at Chichester 2014, A Christmas Carol [for Birmingham Rep/Chichester Festival Theatre], Precious Bane, The Wicked Lady, Treasure Island [National Theatre 2014-15] and Behind The Scenes At The Museum for York Theatre Royal.