Just hours to go until this year's Olivier Awards, which take place this Sunday 9 April. The 2017 Oliviers aren't just the biggest ever - held for the first time at the Royal Albert Hall and broadcast primetime on ITV - they're also the most social ever with lots of innovations in the mix. We're counting down this week. Each day, in reverse chronological order, we'll be rounding up the best awards content being shared on social media, including our own daily polls for who you think should win what...

You can view our previous Oliviers news and blogs (including how many items have you ticked off our "9 things to do before the #OlivierAwards checklist"?), plus get all social media for the awards and the 2017 nominated musicals and musical theatre performers on our dedicated Olivier Awards #StageFaves page.

It really is nearly here. And at the Royal Albert Hall, the mass crew who make the Olivier Awards happen are truly in the thick of it...

With one more day to go, the crew are in the thick of it. pic.twitter.com/FwKlSgSZeR

For more views from various behind-the-scenes perspectives - building the set, preparing the press room, rehearsing the red carpet, conflabbing with the production team and much more - check out our Twitter Moments feature of revealing pics and videos.

What are the nominees up to with one day to go? School of Rock's David Fynn appears to be hyperventilating...

Getting @OlivierAwards ready. An actor prepares. think @AlfieBoe would turn up in a tux without prepping like this first? NO WAY! pic.twitter.com/TDaWBre7yA

Karen Fishwick is making some dress adjustments, while her fellow Our Ladies of Perpetual Succour joint nominee Melissa Allan is catching a matinee of another Olivier-nominated show, Half a Sixpence...

And The Girls' Debbie Chazen is tucking in to a sweet treat...

Don't worry, you can listen to the full Curtain Up show broadcast now via Resonance FM on catch-up podcast...

On @StageFaves Twitter, we're asking you for your final prediction, this time for Best Musical Revival. Yesterday, you tipped Andrew Lloyd Webber's School of Rock for Best New Musical. With two Lloyd Webber classics in the Revival running - Jesus Christ Superstar and Sunset Boulevard - will you predict a double Olivier win for the Lord?

Got that #FridayFeeling? It's just TWO days to go until the 2017 Olivier Awards, and the juggernaut has moved in to the awards new home at the Royal Albert Hall...

While the fan focus is understandably on winners, nominees and performers, it takes an army to put on a major event like this - and bigger than ever this year. We tip our hands to general manager Katie and all the Olivier Awards team, who will be getting very, very little sleep this weekend...

Our General Manager Katie in a very official state of business. pic.twitter.com/lrfjuGog7V

Want a different artistic take on Olivier nominated shows and performances? Be sure to check out all of these beautiful pen and ink drawings care of Dramatic Inkings. Are you able to identify all six shows below? You can see more via @DramaticInking and illustrator Andy Robinson's website www.dramaticinking.com. 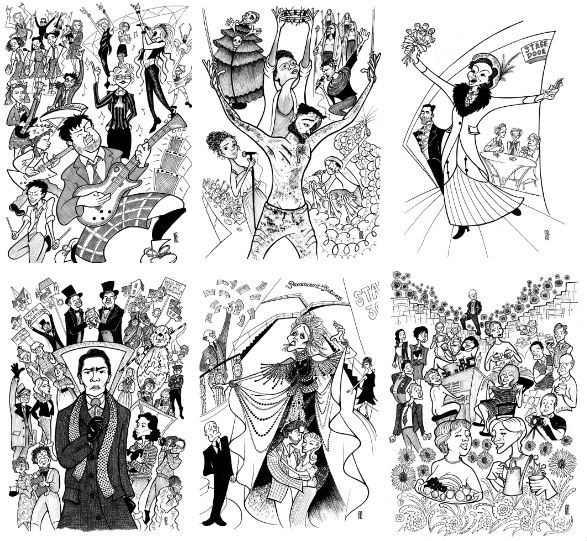 On #StageFaves social, based on our Twitter polls to date for the musical performance categories, you reckon Half a Sixpence is going to have a very good night on Sunday. Today, we're gathering your predictions for the biggie. Which show will take home Best New Musical? Such a difficult field!

Faves founder Terri Paddock joins her MyTheatreMates colleague Mark Shenton to discuss these and other predictions for The Curtain Up Show's Olivier special, broadcast live today from the Prince of Wales Theatre. (We reckon you may seem some tweets from @TerriPaddock too!) You can tune in on Resonance FM from 3.30 to 5.00pm, with Mark and Terri scheduled to be on air from 4.40pm.

How many days until the Olivier Awards? As if you didn't know...! (Can you make out who's in this photo by brilliant Theatreland photographer Darren Bell?) 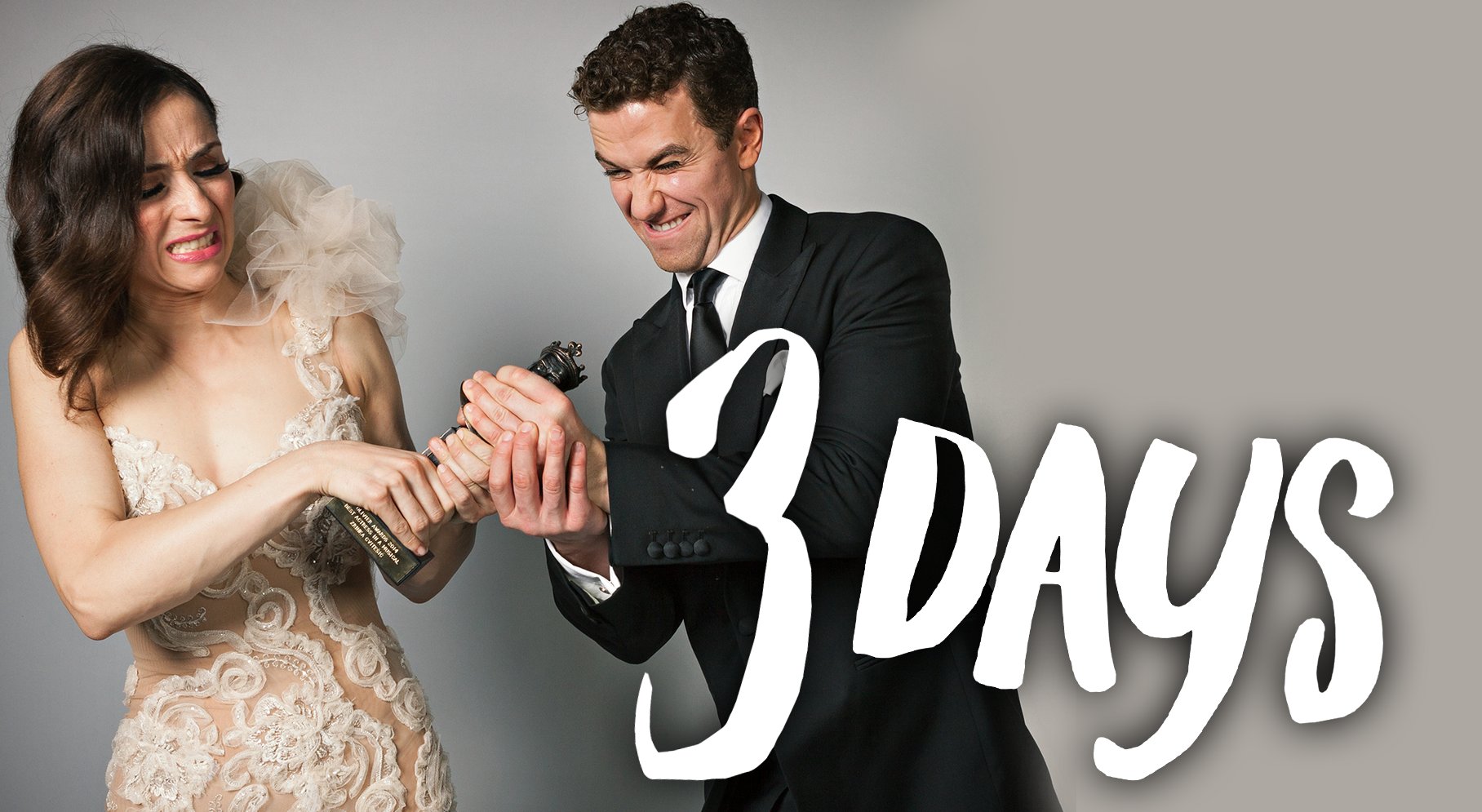 More guest presenters to hand out those famous statuettes have been announced, including #StageFaves Alfie Boe (about to appear in Carousel) and Rufus Hound (transferring The Wind in the Willows to the London Palladium later this year...

Casts performing at the ceremony have been holding sitzprobes across London. These include Dreamgirls, School of Rock and Jesus Christ Superstar - more line-up details here. Frazer Hadfield reveals where The Girls have been rehearsing...

And seems like the female nominees - including The Girls' Debbie Chazen, Victoria Hamilton Barritt and Emma Williams - have been putting a lot more effort into preparations for Sunday night. We predict they'll all look stunning on the red carpet!

My fab frock from @RolandMouret is in this bag! Can't wait 2 wear it on the red carpet @OlivierAwards #livinthedream pic.twitter.com/4fB7mqawzZ

Home after a long day to find @OlivierAwards tickets on the doormat. Oh my how excited I am! Can't wait to get spruced up on Sunday! Xx

Speaking of Emma Williams, she got #StageFaves' fans votes to win Best Supporting Actress in a Musical on Sunday night, for her performance in Half a Sixpence. For today's Twitter poll, we're voting on Best Supporting Actor in a Musical. Also on #StageFaves today, have you seen Natalie Gomez's #ThrowbackThursday round-up of opening nights for the four shows nominated for Best New Musical. Have a look to remind yourself - we'll be voting on that tomorrow!

How well do you know the Royal Albert Hall, where the Olivier Awards makes its new home this year? Jamie Lambert, from musical theatre supergroup Collabro, has been receiving a private tour of this historic London venue - broadcast in full via Facebook Live today.

This is a little taster ahead of this year's "Red Carpet Live", which will stream from 4.30pm to 6pm on Sunday and will be hosted by Jamie along with Anita Rani and NY1 presenter Frank DiLella. We'll certainly be following along on #StageFaves!

Meanwhile, more guest presenters have been announced for the ceremony itself at the Royal Albert Hall - including lots of #StageFaves! Joining the likes of Mark Rylance and Nathan Lane to hand out the gongs onstage are: An American in Paris co-stars Robbie Fairchild and Leanne Cope, 42nd Street's Sheena Easton, last year's Best Actor in a Musical Matt Henry and current Phantom Ben Forster...

And Ben Forster, for one, is just a tad excited!

So excited and proud to have been asked to present an award at this years @OlivierAwards at the @RoyalAlbertHall bring on Sunday!! https://t.co/riFGI7dGnW

Speaking of the Olivier statuettes, do you know how they're actually made? Like most things theatrical, it's an art in and of itself. Watch and learn...

It's not just the nominees who bring the star power to UK theatre's biggest night of the year. Today, the Olivier Awards started to tantalise us with some of the stellar presenters that are lined up to hand out the gongs...

Not forgetting, of course, that some of Theatreland's biggest stars aren't famous at all. One of the awards innovations this year is a special set of accolades for six "Be Inspired" champions, people who make theatre work behind-the-scenes. Check out our Olivier Awards page for details of all six. But here's a video we truly love introducing Harry Gabriel, stage door keeper at the West End's Shaftesbury Theatre for over 40 years. Cedric Neal, who stars in the theatre's current hit show, Motown, is amongst those paying tribute and handing out hugs...

Resonance FM's The Curtain Up Show are giving away tickets to their Olivier Awards special, broadcast live from the Prince of Wales Theatre this Friday afternoon (7 April) ahead of Sunday's awards ceremony. In addition to various #StageFaves in the Olivier Awards running this year, the guest line-up on the show includes Faves founder Terri Paddock and her My Theatre Mates' colleague Mark Shenton. Enter the TodayTix lottery by 10.30am tomorrow (Wednesday 5 April)...

Terri will be discussing Olivier predictions on The Curtain Up Show on Friday, including yours! After a concerted effort for fans of The Girls, the ladies from Yorkshire have been tipped to win Best Actress in a Musical so far. Our daily Twitter polls to gather your Olivier predictions continue today with Best Actor in a Musical...

This one week (now less than) to go gif featuring last year's Best Actress in a Musical nominee Tracie Bennett made us pump our fists...

A year ago today @OlivierAwards I looked up at my @KinkyBootsUK cast & thanked them for continuing to raise me up. A year on they still doâ¤ï¸ pic.twitter.com/xdLX3ahmKX

Also today at #StageFaves, we've launched our own daily Twitter polls to gauge who you think will win what on Sunday night. Today, your predictions for Best Actress in a Musical. Will it be Glenn Close, Amber Riley, Sheridan Smith or the cast of The Girls? Be sure to vote and RT!