The bond between performers and fans has always been a strong one and in the age of social media, it's easier than ever to keep up with your favourite actors. Many fans love waiting at stage door to catch a few seconds with their heroes and it can be disappointing when you don't get to meet them after a show. But recently there have been incidents of fans taking to social media to air their grievances and personally attack the actors. Ben Platt, Tony Award-winning actor in DEAR EVAN HANSEN recently responded to these attacks, and Lisa Martland of Musical Theatre Review explains why his priorities are in the right place...

I am not a stranger to fandom, I vividly recall having posters of 1980s pop stars on my bedroom walls. And as my passion for theatre, and musicals in particular, grew, I wasn’t a complete stranger to the Stage Door after a performance – shyly standing in a crowd, hoping to get the autograph of my favourite star. I would even admit to getting pretty obsessed by shows nowadays, as anyone who has had to sit in my car lately will attest to:

“it’s the Hamilton Mixtape or the original Broadway cast recording of Dear Evan Hansen – what do you prefer?”

I have also been very lucky, in that I have been able to combine my passions – for journalism and theatre – and have had the opportunity to meet performers and practitioners that I very much admire. On rare occasions, these meetings have led to friendships, but on the whole I’ve always been respectful of the line that exists between my profession as a writer and critic, and theirs  – whether it be as a performer, composer, choreographer, director etc.

In years gone by, that line also existed between stars of theatre and their fans. On the whole, this relationship can be more intense in the world of musicals, where shows often have an incredibly dedicated following with avid theatregoers visiting productions time and time again. Dedicated fans of some musicals will also travel all over the world to catch their favourite shows and/or performers.

There is, of course, nothing wrong with any of that. Producers of musicals – and all those involved on and offstage – appreciate that without this kind of support, their productions would play for substantially shorter runs. What has changed, though, is how much a percentage of theatregoers (and perhaps it is a tiny number) expect from their favourite theatre stars.

This issue has been highlighted recently by Tony Award-winning star of Broadway’s Dear Evan Hansen, Ben Platt [Pitch Perfect movies, The Book of Mormon on Broadway], who felt compelled to defend himself on Twitter after not appearing at the stage door as regularly as fans hoped he would (or believed he should). He wrote:

“Performing Dear Evan Hansen every night is wonderful but also hugely tough – as much as I would like to be out there every night, very often I cannot come to the stage door after the performance. My priority must always be self-care so I can recreate the same quality show each night. That’s my job, and what each and every audience member is paying for and deserves. Before you tweet hateful things about how I don’t value our incredible fans when I can’t come to the door, please pause to consider that my responsibility to them is first and foremost to give my all each night. I preserve myself because I value each of them deeply.”

I imagine this was Platt’s response to one particularly unpleasant Tweet which read:

“@BenSPLATT You are an asshole! My daughters waited for you twice after seeing your show but refused to come out and greet fans. Garbage!”

“Other jobs are harder work than being a thespian. Don’t be a prima donna. Cherish your fans. The Tony excuses nothing.”

Now, I am not so obsessed with theatre that I believe an actor fulfils the same role as a fire fighter or doctor. But I do believe art in all its many forms can nurture, heal, inspire, move, motivate and stimulate at the very same time as entertain.

I haven’t been lucky enough to see Dear Evan Hansen yet – I am on the wrong side of the pond at the moment – but I have (as mentioned above) listened to the cast recording on numerous occasions and watched many a YouTube interview or performance. I can already see why it has resonated with audiences of all ages.

For those of you who don’t know, the musical is about a unhappy, socially anxious high school kid who has becomes so lonely that he has almost given up on trying to communicate with his peers (and his relationship with his divorced mother is going through a rough patch too). The prevalence of social media doesn’t help his sense of isolation either. Peculiarly, it is the suicide of a fellow student, and Evan’s embroilment in a lie told to the boy’s grieving family, that allows him (and those around him) to find a new beginning.

Somehow songwriters Benj Pasek and Justin Paul, librettist Steven Levenson, and a creative team led by director Michael Greif, have managed to treat the subject of teenage suicide with the utmost respect and care, while creating a theatrical experience that has much humour and empathy. It is a piece that connects with audiences on so many levels. It is also a hugely intense, emotional rollercoaster ride for its star, Ben Platt, who by all accounts throws his heart and soul into every performance.

In the first paragraph of an excellent New York Times interview with Platt published in May this year, Joel Lovell comments that the role of Evan Hansen “ranks with Hedwig and Jean Valjean in its physical and emotional demands”.

He continues: “You’re stunned by the intensity of it [the performance], and then you immediately think of the toll it must take on him night after night. It seems impossible to sustain, and yet he’s been doing it now since mid-November, a feat that has made him not just musical-theater famous, but also Met Gala, late-night-TV, Time 100-most-influential-people-in-the-world famous.”

When Lovell asks Platt how he manages not to burn out physically and spiritually, the actor responds: “I live a pretty monkish existence. It won’t always be like this. But I feel as long as I’m doing this role, everything I do has to be in the service of that. I don’t want there to be a single performance where people leave feeling like they didn’t get the best I could offer. If that means denying myself some things, that’s O.K. I don’t think anything can be genuinely fulfilling or powerful if it’s not taking some kind of a toll. For now, I’m definitely willing to let that toll be taken.”

Interestingly, during the time Lovell spends with Platt, he sees him meet fans at the Stage Door, sign at least a hundred Playbills, and listen to stories of what the show means to those waiting outside. 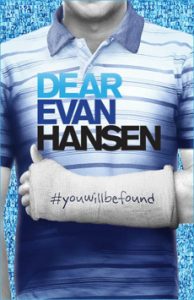 Should it really come as any surprise that there are occasions when Platt – who has his own issues with anxiety – needs some space to recharge, to be alone with his own thoughts, to spend time not being ‘on’ with close friends and family, to just be allowed to rest. Why should we expect Platt’s time – beyond the incredibe performance he gives eight times a week – to belong to anyone but himself?

And Platt is not saying he is never going to be at the Stage Door, he is just letting fans know he may not be able to be there every time – that for him the quality of the performance will always come first. Surely those are the actions of an actor who has got his priorities straight.

The pros and cons of social media play a role in the telling of Evan Hansen’s story and, coincidentally, it is through Facebook, Twitter, Instagram, Snapchat etc, that musical theatre fans can get even closer to their favourite stars. And if those artists retweet a comment or even directly respond, then that’s even more of a boost. A selfie at the Stage Door is the icing on the cake. This can be a rewarding experience on both sides: most performers would be heartened to hear how much their work has made a connection with an audience. But that line I mentioned before still needs to exist.

For the time we are in the company of these artists and the shows they perform in, that experience belongs to us, and we take it away and savour it. But after we have left there is another audience that very same cast has a duty to. This process has to be respected, as does the the well-being of the performers who share their talent with us on numerous occasions. That vicious Tweet mentioned above came from someone who has lost track of that – for her, the selfie at the Stage Door has become the important job to do. She is the one with her priorities skewed.

Among the very many responses to the vicious Tweets quoted above, one of the most memorable read:

“How do you literally see a show about how important someone’s feelings are and you go bully the main actor after???”

The person who writes this probably makes the best point of all.

It would be bad enough to shout expletives via social media at an actor purely for not coming to the Stage Door, but to aim such remarks at an artist who strives every night to tell the story of an isolated individual who desperately tries to connect with an unwelcoming world is worse still.

It’s time some fans remember why they fell in love with musical theatre in the first place. It’s those communal feelings of joy and sadness that rise within us when we are in the company of great music and compelling stories. That’s what Ben Platt delivers every day of the week. Those are the memories to savour.