StageFaves founder Terri Paddock this week hosted a post-show Q&A with legendary Broadway lyricist Sheldon Harnick and the stars of the UK premiere of Rothschild & Sons at the Park Theatre. Listen to the full podcast from an insightful and heartfelt discussion here...

The Jewish story must continue to be told, Sheldon Harnick told me and a packed house at London’s Park Theatre after Tuesday night’s performance of Rothschild & Sons, for which he wrote the lyrics to the music by late collaborator Jerry Bock.

My post-show Q&A with Sheldon, and the UK premiere of Rothschild & Sons the night before, come in the same week as the annual Holocaust Memorial Day and, unhappily, a new report released today showing that the number of anti-semitic incidents have reached a new record level in the UK, with violent attacks on Jew rising 34% last year.

If for no other reason, it is to combat such prejudice and ignorance, that this production of Rothschild & Sons is so necessary and really should be seen. “The Rothschild conspiracy” is one of the most pernicious and enduring smears used by bigots to justify their anti-semitism. This musical, a one-act re-imagining of the two-time Tony Award-winning 1970 musical The Rothschilds, tells the real human story of Mayer Rothschild and his five sons, who built a banking empire in 19th-century Europe and used it to secure hard-won freedoms for Jews across the continent.

At the post-show Q&A, Sheldon Harnick (now 93) spoke more about his legacy of presenting the Jewish experience on stage, through this show and his earlier collaboration with Jerry Bock, stage and screen blockbuster Fiddler on the Roof, which preceded The Rothschilds by six years, and why he and Bock (who died in 2010) never worked together again after 1970.

For the discussion we were also joined by Arnold Mittelman, the show’s American producer and president of the National Jewish Theatre Foundation, director Jeffrey B Moss, Broadway stars Robert Cuccioli and Glory Crampton, reprising their roles as Mayer and his wife Gutele from Rothschild & Sons' 2015 staging in New York, West End star Gary Trainor, who plays middle son Nathan (a role Cuccioli played in a 1991 US revival of The Rothschilds!). 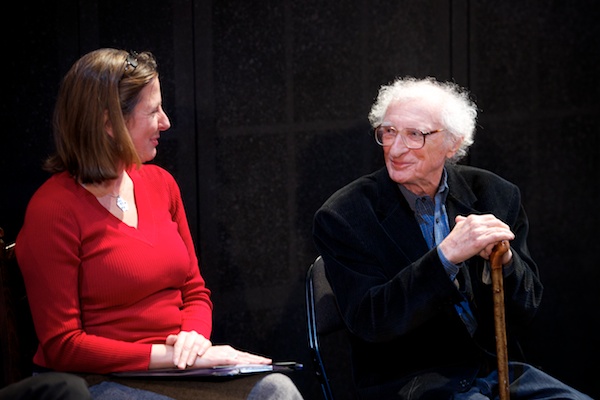 Terri Paddock with Sheldon Harnick at the Park Theatre

Other topics covered included why the creatives wanted to revisit the story of the Rothschilds after more than forty years, the indelible mark our family makes on us, the actors’ approaches to their characters (and whether Robert taught Gary anything about Nathan Rothschild), differences in US versus UK reactions and a fair bit about the real Rothschilds today, including from several well acquainted audience members!

One of Broadway’s most successful songwriting partnerships, Sheldon Harnick and Jerry Bock hits include Fiorello! (1959) and She Loves Me (1963) in addition to The Rothschilds and Fiddler on the Roof (1964). In addition to three earlier Tonys for Fiorello! and Fiddler, Sheldon was presented with a Lifetime Achievement Award at the 2016 Tony Awards.

Rothschild & Sons runs at London’s Park Theatre until 17 February 2018, with performances Monday to Saturday at 7.30pm, Thursday and Saturday matinees at Tickets are priced £18.50-£29.50. CLICK HERE TO PURCHASE!

For more photos and live-tweeting from the Rothschild & Sons Q&A, visit Terri's personal website at www.terripaddock.com.