Get your glass slippers ready. Rodgers + Hammerstein's CINDERELLA is coming to London. The Broadway version of the screen-to-stage fairytale musical gets its UK premiere in a concert version, directed by Jonathan O'Boyle and accompanied by the London Musical Theatre Orchestra, at Cadogan Hall for one night only on Sunday 20 October 2019.

Rodgers & Hammerstein are, of course, best known for their blockbuster Broadway classics The Sound of Music, South Pacific, The King and I, Carousel and Oklahoma!, all of which have received major revivals in recent years. CINDERELLA is the only musical the pair wrote for television rather than the stage.

Written as a vehicle for The Sound of Music star Julie Andrews, CINDERELLA was originally broadcast live on CBS Television in 1957. It was twice remade on TV, first in 1965 for Lesley Ann Warren and then again in 1997 featuring Brandy and Whitney Houston. The original Broadway production of Rodgers + Hammerstein's CINDERELLA opened in 2013 and ran for two years.

Take Two Theatricals and Club 11 London present the UK premiere of this Broadway version of Rodgers + Hammerstein's CINDERELLA in a one-off concert at London's Cadogan Hall on Sunday 20 October 2019.

The semi-staged concert will feature some of Rodgers & Hammerstein's most beloved songs, including “In My Own Little Corner,” “Impossible/It's Possible” and “Ten Minutes Ago,” alongside a romantic new book by Tony Award-nominee Douglas Carter Beane, as well as some new characters and surprising twists.

The concert will be directed by Johnathan O’Boyle, whose recent musical credits include Hair, Aspects of Love, Pippin and, currently running at Soho Theatre care of Take Two Theatricals, The View Upstairs. Musical direction will be by Freddie Tapner, along with a 21-piece orchestra featuring London Musical Theatre Orchestra (LMTO). Casting will be announced shortly. 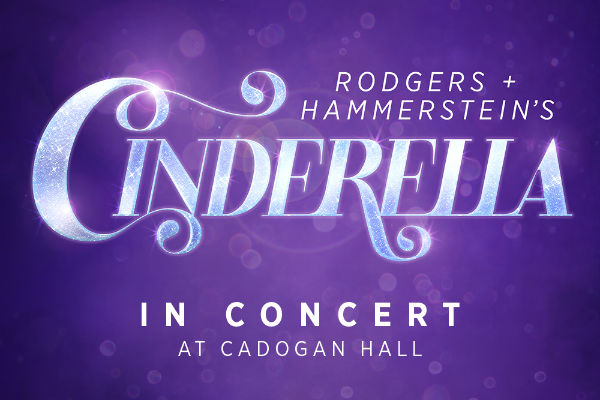