By the press statements released, sounds like something went awry in negotiations... Blame the agent? Whatever the reason that Jimmy Nail is no longer appearing in the UK premiere of THE LAST SHIP, we think it's pretty cool that Joe McGann and Richard Fleeshman are onboard. Have you seen who else is in the cast for Sting's debut musical, opening in Newcastle in March?

Joe McGann will replace Jimmy Nail as Jackie White when Sting’s Broadway musical The Last Ship receives its UK premiere this spring. Further principal casting has also been announced today for the new production, which opens at Northern Stage on 12 March 2018 for four weeks ahead of a major UK and Ireland tour.

The Last Ship has a Tony-nominated original score and lyrics composed by Sting, is directed by Lorne Campbell, the artistic director of Northern Stage and designed by the Tony Award-winning 59 Productions, the team behind the video design for the 2012 London Olympic Games. Joe McGann is joined in the UK cast by Charlie Hardwick (Peggy White), Richard Fleeshman (Gideon Fletcher) and Frances McNamee (Meg Dawson).

When a sailor named Gideon Fletcher returns home after seventeen years at sea, tensions between past and future flare in both his family and his town. The local shipyard, around which the community has always revolved, is closing and no-one knows what will come next, only that a half-built ship towers over the terraces. With the engine fired and pistons in motion, picket lines are drawn as foreman Jackie White and his wife Peggy fight to hold their community together in the face of the gathering storm.

This personal, political and passionate new musical from multiple Grammy Award winner Sting, is an epic account of a family, a community and a great act of defiance. The Last Ship features an original score with music and lyrics by Sting as well as a few of his best-loved songs; Island of Souls, All This Time and When We Dance. It is the proud story of when the last ship sails. 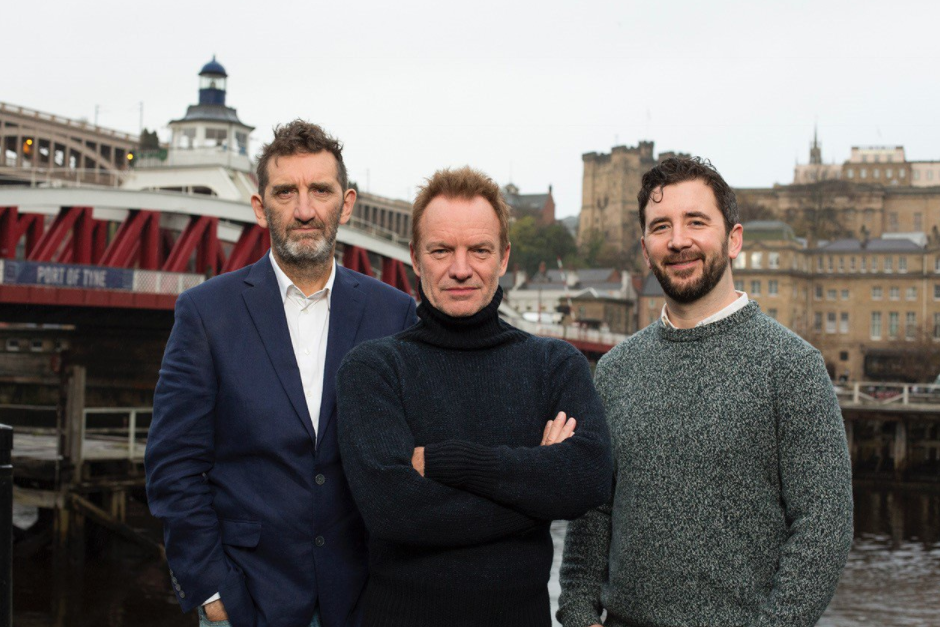 The Last Ship, which was initially inspired by Sting’s 1991 album The Soul Cages and his own childhood experiences, tells the story of a community amid the demise of the shipbuilding industry in Tyne and Wear, with the closure of the Swan Hunter shipyard.

Jimmy Nail (pictured right with Sting and Campbell in Newcastle), who was to reprise the role of Jackie White which he played on Broadway, will no longer be performing in the production. He said:

“I was very much looking forward to appearing in Sting’s The Last Ship, particularly here in my home city. Sadly, that’s not to be. I would like to thank the production in allowing FACT, the charity of which I’m a patron, to benefit from the planned gala charity event. To anyone who has purchased a ticket, please, go see the show and give this vessel the launch it so deserves. You’ll hear some of the finest musical works ever composed for the stage.”

Karl Sydow, producer of The Last Ship, said: “After protracted negotiations carried out in good faith, we regret to announce the production’s offer of employment to Jimmy Nail has been withdrawn.  All at The Last Ship thank him for his generosity and enormous contribution during what has been an eight-year journey.”

Lorne Campbell, Northern Stage’s Artistic Director, said: “I am delighted to be welcoming Joe McGann, Charlie Hardwick, Richard Fleeshman, Frances McNamee and the rest of the company to Northern Stage for The Last Ship. Alongside some wonderful old friends of the company, we welcome some remarkable new performers from across the UK. We are all hugely excited to move into rehearsal and to bring this incredible score and epic story to audiences across the UK and Ireland.”

The Last Ship is produced by Northern Stage in association with Karl Sydow and Kathryn Schenker.