Do biscuits inspire your creativity? Custard creams, Hob Knobs or pink wafers? Before he became a world-famous novelist (think Mortal Engines), Philip Reeve shared a spark of inspiration over a cup of tea in Brighton with Brian Mitchell. Terri Paddock talked to them about their collaboration 20 years on as The Ministry of Biscuits is revived...

Charming, delectable, delicious. And those are just the custard creams… It’s not often I get offered biscuits at the post-show Q&As I chair, but at a show called The Ministry of Biscuits, it would have seemed remiss not to.

Since its 1998 premiere, this delightful musical has been scaled down to a bijou four-hander performed by The Foundry Group’s Brian Mitchell (who also wrote the music and co-wrote book and lyrics with Philip Reeve), David Mounfield, Murray Simon and Amy Sutton. After extensive touring, it’s now transferred to Barons Court Theatre for a limited London season.

Here’s the bonkers idea: In rationed, post-World War II Britain, fancy biscuits are subversive. The Ministry has been established to “control biscuits, and to control the idea of biscuits.” Anything more exotic than Rich Tea outlawed. What happens when one decadent designer goes rogue?

Think George Orwell‘s 1984 meets Gilbert & Sullivan and The Ealing Comedies. Super, silly, and perhaps a deeper meaning about open versus closed, collectivism versus individuality, past versus future (especially in our times).

For last week’s post-show Q&A, I was joined by the company and, making a special visit, Philip Reeve. Since leaving Brighton, where he and Mitchell collaborated in the 1990s, Reeve has gone on to international renown as the author of novels including the Mortal Engines series (now a major feature film). But it was evident from the post-show discussion that he’s got another musical collaboration in him… and the idea was revealed exclusively! Watch the full post-show Q&A below.

The Ministry of Biscuits continues at Barons Court Theatre until 10 February 2019. 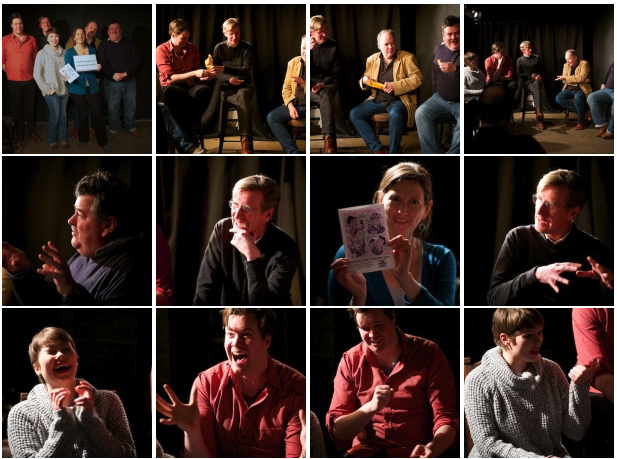 The Ministry of Biscuits