Not content with taking over Charing Cross Theatre and helming a season of major musicals there, director Thom Southerland and producer Danielle Tarento return to Southwark Playhouse with another major coup: the European premiere of Rodgers & Hammerstein's ALLEGRO, nearly 70 years after its Broadway premiere. The pair have previously had hits at Southwark Playhouse with Grey Gardens, Grand Hotel, Titanic, Parade and Mack & Mabel.

Rodgers and Hammerstein’s 1947 Broadway musical ALLEGRO will receive its long-overdue European premiere, running for a six-week season at London’s Southwark Playhouse from Friday 5 August until Saturday 10 September 2016, with a press night on Thursday 11 August. It’s directed by Thom Southerland, who is working on a new adaptation of the book and the production will have brand new orchestrations, and produced by Daniel Tarento, continuing their long, multi award-winning association.

With a gorgeous, epic score by Richard Rodgers and a groundbreaking for its time book by Oscar Hammerstein II, Rodgers & Hammerstein’s ALLEGRO opened in 1947 to the highest advance in Broadway history. Almost 70 years later, this extraordinary musical is finally getting its professional European premiere, produced by Danielle Tarento and directed by Thom Southerland

In 1905 in a small Midwestern town, the wife of a local doctor gives birth to a baby boy, Joseph Taylor Jr. Allegro chronicles nearly four decades in the life of this average Joe – through his childhood, from college dorm to marriage altar, and on to his own medical career; from the tranquility of his hometown to the hectic din of big city life and a mid-life discovery of who he is and what his life is truly about, ultimately learning the most important lessons of all – the value of family, that money isn’t everything and that home really is where the heart is.

Rodgers & Hammerstein’s ALLEGRO, with music by Richard Rodgers, book and lyrics by Oscar Hammerstein II, their third collaboration for the stage following Oklahoma! and Carousel, will be produced by Danielle Tarento and directed by Thom Southerland, the award-winning team behind Grey Gardens, Grand Hotel, Titanic, Parade and Mack & Mabel.

Cast and full creative team to be announced. 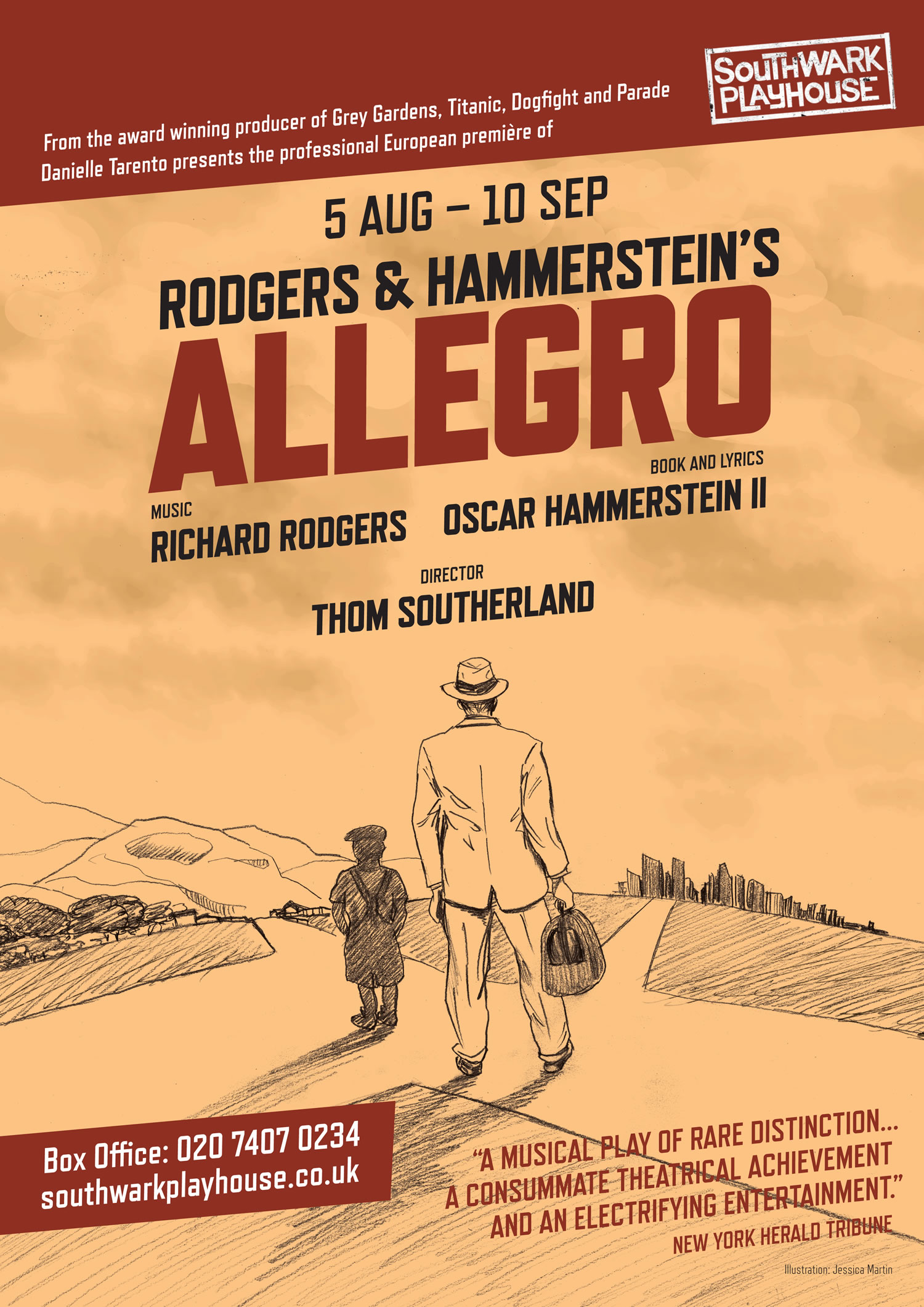 After long and highly distinguished careers with other collaborators, Richard Rodgers (composer, 1902-79) and Oscar Hammerstein II (librettist/lyricist, 1895-1960) joined forces in 1943 to create the most successful partnership in the American musical theatre. Prior to his work with Hammerstein, Rodgers collaborated with lyricist Lorenz Hart on a series of musical comedies that epitomized the wit and sophistication of Broadway in its heyday.  Among their greatest successes were Pal Joey, On Your Toes and Babes in Arms.  Throughout the same era Hammerstein brought new life to the operetta, culminating in the masterpiece, Show Boat (music by Jerome Kern). Oklahoma!, the first Rodgers and Hammerstein musical, was also the first of a new genre, the musical play, blending Rodgers’ musical comedy style with Hammerstein’s innovations in operetta. Oklahoma! was followed by Carousel, State Fair (film ’45, ’62; Broadway ‘96), Allegro, South Pacific, The King and I, Me and Juliet, Pipe Dream, Cinderella (television ’57, ’65, ’97; Broadway ‘13), Flower Drum Song and The Sound of Music. Collectively, the Rodgers and Hammerstein musicals have earned Pulitzer Prizes, Oscars, Tonys, Emmys, Grammys, and Olivier Awards.

Thom was recently named Artistic Director at Charing Cross Theatre. His opening season of major musicals, produced by Danielle Tarento, Steven M. Levy, Sean Sweeney and Vaughan Williams, includes the return of his acclaimed multi award-winning Titanic and the European première of Death Takes a Holiday. He was longlisted Best Newcomer in the 2011 Evening Standard Awards for Parade. He was named Best Director at the 2011 The Offies – Off West End Theatre Awards – for Me And Juliet at the Finborough. He directed Grey Gardens, Grand Hotel, Titanic, Victor/Victoria, Mack & Mabel and Parade (Southwark Playhouse); Jerry Herman’s The Grand Tour (Finborough) The Mikado (Charing Cross Theatre), Daisy Pulls It Off, Irving Berlin’s Call Me Madam! (Upstairs At The Gatehouse); the European première of I Sing!, Divorce Me, Darling!, Annie Get Your Gun, The Pajama Game and sold-out all-male adaptations of Gilbert and Sullivan’s HMS Pinafore and The Mikado (Union); Noël and Gertie (Cockpit); the European première of The Unsinkable Molly Brown (Landor); and the European première of State Fair (Finborough & transfer to Trafalgar Studios); The Smallest Show on Earth (Mercury Theatre, Colchester & tour) .

Danielle was named Best Producer at the 2012 Off West End Awards and won Best Off West End Production at the 2014 Whatsonstage Awards and Best Musical Production at the 2014 Off West End Awards for Titanic at Southwark Playhouse. She has also produced Grey Gardens, Grand Hotel, Dogfight, Victor/Victoria, Mack & Mabel, Parade, Company and Three Sisters at Southwark Playhouse; Pure Imagination: The Songs of Leslie Bricusse (St James Theatre), Taboo (Brixton Clubhouse); The Pitchfork Disney (Arcola); Burlesque, Drowning on Dry Land (Jermyn Street); Noël and Gertie (Cockpit). She is co-founder of the Menier Chocolate Factory and co-produced all in-house shows 2004 – 2006, including Sunday In The Park With George, which received a West End transfer and 5 Olivier Awards. She is co-producing the current season of musicals at Charing Cross Theatre.