Judy, Judy, Judy! All three Judy Garlands - Helen Sheals, Belinda Wollaston and Lucy Penrose - wowed us in Through the Mill at Southwark Playhouse last year. Now the renamed bio-musical, JUDY!, with its trio of leading divas gets its West End debut this May at the Arts Theatre... 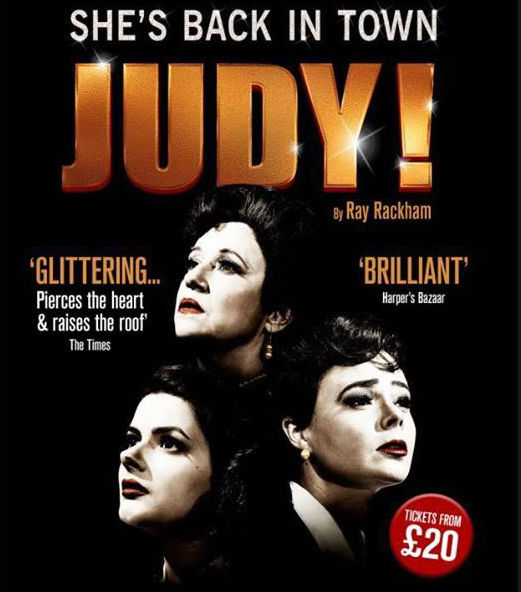 Following a critically acclaimed debut season at Southwark Playhouse under its original title, Through The Mill, Ray Rackham’s biographical musical about the life of iconic movie star and chanteuse, Judy Garland, arrives in London’s West End this summer.

Now simply titled JUDY!, the production will run with its original cast – led by its trio of Judy Garlands: Helen Sheals, Belinda Wollaston and Lucy Penrose – at the Arts Theatre for a limited season from 16 May to 17 June 2017, with a press night on 18 May.

Since her first tentative steps on the stage as a young girl, Judy Garland has become an enduring icon to millions of fans of all generations around the world. Leaving behind the usual portrayal of Garland’s life as one of pure heartbreak and self-destruction, Ray Rackham has created a poignant and ultimately uplifting story portraying the star as a survivor in a man’s world. He has cleverly created an overlapping story of three ages of Judy – Young Judy (an innocent girl filled with hope and excitement as she heads toward her life-changing performance in The Wizard of Oz), Palace Theatre Judy (a woman at the height of her performing powers in the midst of a passionate romance with Sidney Luft) and CBS Judy (an older and possibly wiser woman) – that demonstrates that no matter how hard we look for love in all the wrong places, the answer is ultimately inside ourselves.

The cast features: Helen Sheals (Last Tango In Halifax, Downton Abbey) as CBS Judy, Belinda Wollaston (Mamma Mia, Titanic) as Palace Judy and Lucy Penrose as Young Judy. The memorable score which is brought to life by a live band, is a wonderful combination of Garland standards interlinked with some of her lesser known numbers and includes The Trolley Song, The Man That Got Away and, of course, Over The Rainbow.

JUDY! began life as Through The Mill and was originally developed by London Theatre Workshop in 2015 before transferring for a limited season to London’s Southwark Playhouse in 2016. In addition to the slew of 5 star reviews, the show was also nominated in two categories at the 2015 Off West-End Awards, Best New Play (Ray Rackham) and Best Female Actress (Lucy Penrose). Additionally, Penrose was nominated London Newcomer of the Year at the 2016 MyTheatreMates “#Also Recognised” Awards. The show also garnered no less than nine BroadwayWorld Award nominations including Best Actress nominations for all three Judys.