Do you know what happened in New Orleans on 24 June 1973? Why should we remember? Watch Faves founder Terri Paddock's post-show Q&A with Tyrone Huntley, Andy Mientus and Cedric Neal, three of the stars of the European premiere of THE VIEW UPSTAIRS...

I had just enough time to wipe away my tears – I was sobbing – at the end of The View Upstairs before jumping up after the curtain call to announce this post-show Q&A at Soho Theatre.

My family are from Louisiana and I’ve been to New Orleans countless times, but it’s thanks to London theatre – first via Martin Sherman‘s Gently Down the Stream at the Park Theatre and now via this transfer of Max Vernon‘s musical – that I became aware of the 1973 arson fire at The UpStairs Lounge in the city’s French Quarter.

On the evening of 24 June 1973, 32 people burned to death there. Until 2016, when 49 people were killed in a mass shooting at the Pulse nightclub in Orlando, Florida, it was the biggest single attack on the #LGBTQI+ community in American history.

In The View Upstairs, first seen Off-Broadway in 2017 and now receiving its European premiere here at Soho Theatre in a production directed by Jonathan O’Boyle, the present collides with the past at this address in stunningly powerful fashion.

Millennial fashion designer Wes (Tyrone Huntley) has just purchased an abandoned building, but little does he know that this forgotten gem was the UpStairs Lounge, a vibrant 1970s gay bar in the French Quarter of New Orleans. So starts an exhilarating, time-travelling journey of seduction and self-exploration in the summertime heat with the rush of lust, sex and incense mixed in the air.

For the post-show Q&A, I was joined by Huntley, Mientus and Neal from the cast as well as two of the show’s producers, Jack Maple and Brian Zeilinger of Take Two Theatricals (who also have the distinction of having been the youngest producers in the history of the West and Broadway, respectively).

That and much more covered. Such a privilege to chair this discussion. (And by the way, Smash fans, I totally understand now why you’re all so keen on Andy Mientus – what a talented performer and really intelligent, insightful and amiable human being!)

For more photography (by Peter Jones), live-tweeting and other coverage from the event, visit TerriPaddock.com. 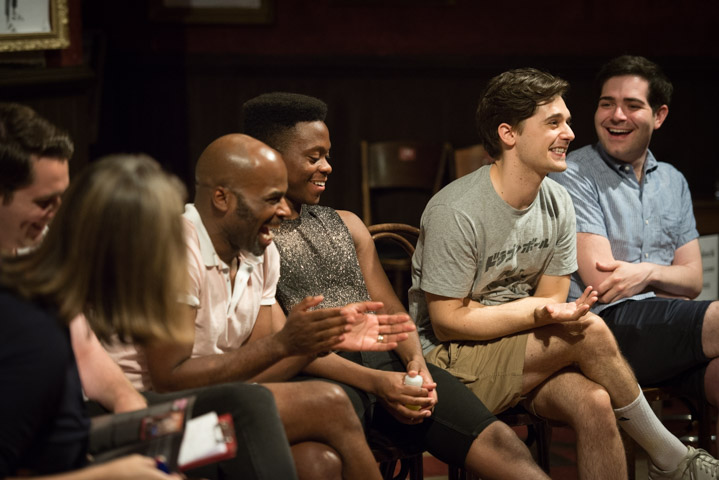