What is Sondheim without some "old friends"? Spanish performer Joan Vázquez brings some West End glitz to his Live at Zédel show by adding special guests Madalena Alberto, Kieran Brown and Rebecca Trehearn to ‘Something’s Coming – a Sondheim tribute’

In the style of recent actor-musician Sondheim latest productions on Broadway, Joan goes solo celebrating music theatre genius Stephen Sondheim with legendary songs such as “Losing My Mind”, “Finishing the Hat”, “Send in the Clowns” or “Being Alive”, accompanied by himself on the piano, while delivering Mr. Sondheim’s witty quotes on the state of the art, love and life.

Joan performs in London one week before making his New York City debut at the acclaimed Feinstein’s/54 Below, where he will present his solo Sondheim show on Wednesday 5th July.

Regarding his upcoming concert in London Joan says:

‘I am very excited about bringing the show back to Zédel. Making my London debut here was literally a dream come true. I couldn’t be more grateful for such a warm welcome. I’m a huge fan of London theatre life and I felt both a great responsibility and an incredible thrill to perform for a West End audience. I have to say they made me feel at home.’

Regarding Sondheim’s work he says:

‘Sondheim is my favourite composer since I played Frank in Merrily We Roll Along in Barcelona and my admiration won’t stop growing. He can take me with just one chord and sometimes with even less. You always know it’s him. His words are beyond. So deep and yet so simple. He’s a wizard.’

Joan’s credits include Claude in Hair, Frank in Merrily We Roll Along, Sky in Mamma Mia! and Lockwood in The History Boys, in the recent Barcelona and Madrid productions. Other credits include Abdullah in the world première of Bagdad Café directed by Percy Adlon, My Fair Lady, and the first Spanish production of Rent, directed by Abby Epstein and Michael Greif.

Joan has regularly worked with repertory companies in Barcelona such as Gataro, The Zombie Company, La Barni or El Musical Més Petit, in revues, cabaret and fringe productions such as Flor de Nit, Le Llaman Copla and Off- Broadway. His writing credits include Se Fue En Un Barco (The Ship that got away), a play about Spanish post-war refugees.

Joan’s debut solo album ‘Something’s Coming - a Sondheim tribute’ with the songs from the show is available on iTunes. 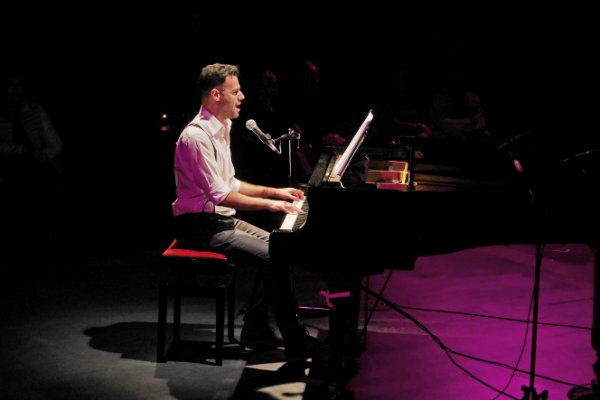