The day has arrived! The Royal Shakespeare Company’s highly anticipated new musical – an adaptation of best-selling children’s author David Walliams' 2008 debut novel The Boy in the Dress with a book by Mark Ravenhill and music and lyrics by chart-topping songwriters Robbie Williams and Guy Chambers – starts performances tonight at the Royal Shakespeare Theatre in Stratford-upon-Avon, where it continues until 8 March 2020 ahead of an anticipated London transfer.

The premiere production of The Boy in the Dress, directed by RSC artistic director Gregory Doran, stars, in the adult roles, Rufus Hound (as the titular boy Dennis' father), Irvine Iqbal (as shopkeeper Raj), Natasha Lewis (as Dennis best friend Darvesh's mum) and Forbes Masson (as headmaster Mr Hawtrey), as well as teams of young stars in the children's roles.

During rehearsals, I spoke to David Walliams about his experience working with the RSC for the first time, what distinguishes Robbie and Guy's music, his own cross-dressing reputation, and his secret wish to play Miss Trunchbull in Matilda. (You can totally see that, can't you? 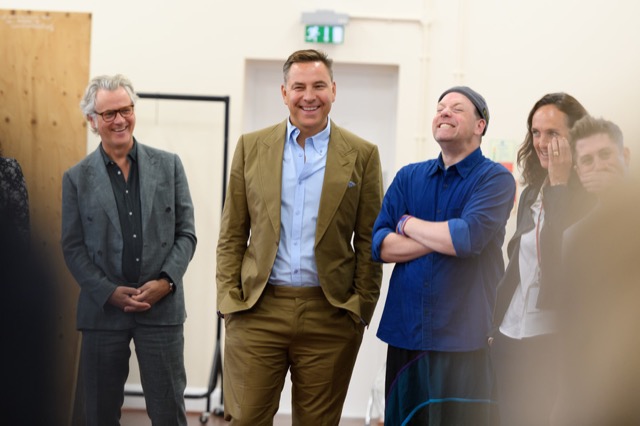 Was there a particular message you were trying to convey with the book of The Boy in the Dress?

It’s quite an adult theme – a boy dressing as a girl – but it’s dealt with in a simple way. I didn’t want to put any labels on Dennis, the boy in the dress. He doesn’t really understand everything that’s going on in the world or what anything means. He’s just Dennis. He wants to be different and to express himself and, in doing so, the world around him changes for the better.

You’ve played a part in adapting a number of versions of The Boy in the Dress. Did you have any qualms letting go here & allowing others to interpret your work?

As an author, I think the only thing you’d be concerned about is if you thought others were changing the meaning of your story in a way that you didn’t intend. Mark has done a brilliant but pretty faithful adaptation. The story that I wrote, the characters that I wrote and some of the lines that I wrote are intact, and the musical is true to the spirit of my book.

Ultimately, the book’s the book and the book will always be there if anyone wants to read it. Each iteration is different in its own way, and anything added is just a plus.

What do Guy Chambers & Robbie Williams, in particular, bring to The Boy in the Dress?

They’re brilliant. What I was really impressed with when I first heard their songs for The Boy in the Dress was how immediate they were. There’s a directness and simplicity to them. Sometimes you can see a musical and you’re listening and you can think, what were they just saying? Because Guy and Robbie are used to writing pop songs, they’re very immediate and very gettable.

Also, while their songs are obviously based on things in The Boy in the Dress, they’re not slavish to it. They’ve found their own new language, but also they’ve somehow enlarged it. They’ve made the whole thing grow and feel much bolder than it was before. Songs have that power, don’t they?

They’re all really catchy too and each song is unique to the character, that character’s voice and the emotion they’re expressing.

The RSC has also had a recent musical hit with Matilda. Are you a fan?

I love everything about Matilda. I’ve gone back lots over the years with different family members and I get something different out of it every time. Actually, I’ve always wanted to be in Matilda – I’d love to play Miss Trunchbull. I’ve suggested it, but you’ve got to be able to commit for six months. I can’t really do six months because I’m busy with other commitments, but if I could do it for a shorter amount of time… Maybe one day.

I’m sure that some people will compare The Boy in the Dress with Matilda, but you can’t worry too much about that. There are similarities – it’s a book for children and it’s a musical – but it’s very different in terms of tone and story. As much as I admire Roald Dahl’s work, I don’t think he would have written this story.

How important has cross-dressing been in your life & career?

I guess I have a history of cross-dressing. My older sister wanted a little sister not a little brother so she used to dress me up when I was a toddler. Then there were school plays. I went to an all-boys school and no one else wanted to play the girls’ roles. I remember once, when we were studying Macbeth, my English teacher wrote on my report “a very memorable Lady Macbeth”.

With Little Britain, even though we were two men doing it, we wanted to show different aspects of life and it felt natural to play female characters – some of whom became quite well known. Cross-dressing is not something I think about a lot, but I know people do associate it with me and that’s fine. I’ve always thought it’s brilliant for people to express themselves. That should be celebrated. 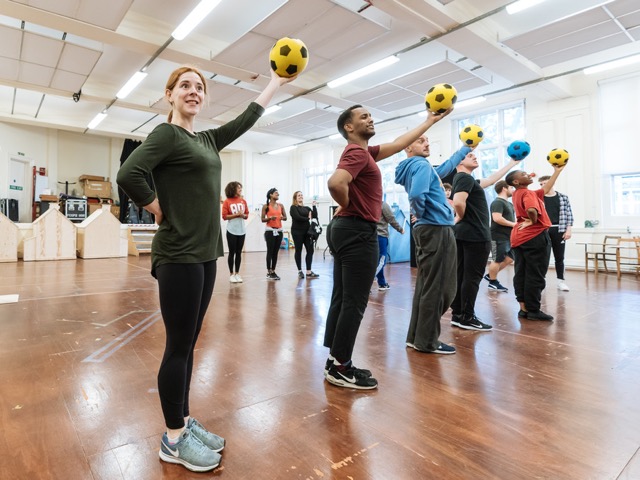 The Boy in the Dress rehearsals

The development of The Boy in the Dress has happened over several years. What have you learned from the process?

When you write a book, it’s a very intimate thing – it’s just you and the page or computer screen. You’re on your own. Even when you publish, there’s an illustrator, a designer or editor, but it’s still a very small number of people. The experience of putting on a musical with the RSC has been something else entirely…. In the first rehearsal, there were over 100 people – all the actors and directors and designers and choreographers – and it was pretty overwhelming. I was humbled and felt quite nervous seeing all these people working to bring what was my vision to the stage. It was one of those moments where you imagine you might feel pride, and I wished the ground would swallow me up.

But it has been amazing to see all these people working together and how every single one of them has to do their job brilliantly for the piece to really take off. I have been impressed.

What would you like audiences to take away from the musical?

Although there are some serious themes in The Boy in the Dress, it’s a funny show. I hope people will have a really good time, have a laugh and sing along, but also take away something that’s a little bit surprising and a little bit challenging. Guy Chambers says it’s feelgood – it’s an overused word, I know, but it is, it’s a really feelgood piece. You should come out feeling more positive about the world.

The Boy in the Dress runs at the Royal Shakespeare Theatre in Stratford-upon-Avon from 8 November 2019 to 8 March 2020. Times vary. CLICK HERE TO PURCHASE!

Itâs THE BOY IN THE DRESS day!

Weâve been waiting for this moment for so long - weâre so excited to share this really special show with you â¨ #RSCBoyinDress pic.twitter.com/dKWBxBFMa3