Newcomer Fred Haig unfortunately won't now be making his official West End debut at the Open Air Theatre this summer as injury forces him out of Drew McOnie's production of ON THE TOWN. But the show goes on with #StageFaves stalwart Jacob Maynard stepping up into the role of Chip, alongside Lizzy Connolly and Danny Mac...

Last Thursday’s press performance of On The Town at Regent’s Park Open Air Theatre in London was postponed at short notice due to incapacity of one of the leads. The theatre has now issued the following statement…

During last Monday evening’s performance (22 May 2017) at Regent’s Park Open Air Theatre in London, Fred Haig – who plays Chip in On The Town – sustained an injury to his foot which has now been confirmed as a fracture. Sadly, this means that he has had to withdraw from the production and we all wish Fred a speedy recovery.

With the support of Danny Mac (Gabey), Samuel Edwards (Ozzie), Lizzy Connolly (Hildy) and all the Company, Fred’s understudy, Jacob Maynard has now stepped out of the Ensemble permanently to play the role of Chip for the remainder of the run. Having trained at The Urdang Academy and The Dance Studio, Jacob Maynard has previously appeared in Guys and Dolls (Savoy/UK Tour), Love Me Tender, Five Guys Named Moe (UK Tour), and Ragtime (Pleasance).

On The Town runs at Regent’s Park Open Air Theatre until 1 July 2017. Press performances for are now taking place tonight and tomorrow (30 and 31 May 2017).

Blogger and StageFaves and MyTheatreMates contributor Ian Foster (@OughtToBeClowns) offers his perspective on the cast change. We all send our best wishes to Fred Haig:

"Fred Haig must have thought that this was his year after landing starring roles in two of the big musicals of the summer but during Monday evening’s performance, he sustained an injury to his foot which has now been confirmed as a fracture. Sadly, this means that he has had to withdraw from On The Town at the Open Air Theatre in Regent’s Park (the second actor to do so after Jeremy Taylor withdrew during rehearsals due to injury) and will be replaced by his understudy Jacob Maynard. We’ll have to wait and see if he recuperates in time to play Young Buddy in Follies at the National.

It is a real shame for Haig as I was at the show last Monday, scarcely believing that we actually had lovely weather for the first musical this year at the Open Air. And Haig’s appealingly charismatic Chip, along with Lizzy Connolly’s vibrant Hildy, was among the highlights of Drew McOnie’s production." 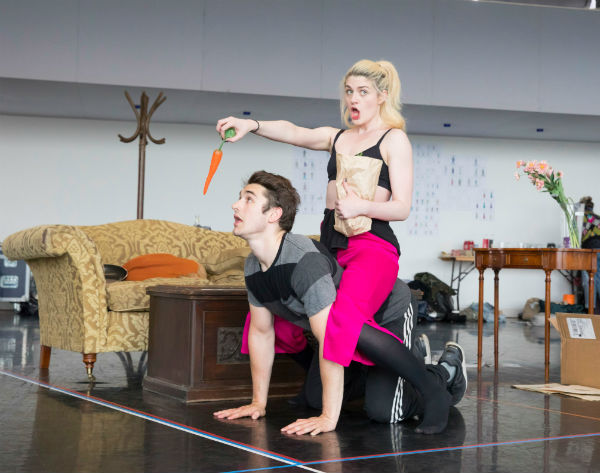 Fred Haig and Lizzy Connolly in rehearsals for On the Town