Fresh from its season at the London Palladium, the musical adventures of Ratty, Toad, Mole & Badger in The Wind in the Willows will be enjoyed by a new audience at Easter with screenings across the UK & Ireland.

The multi-camera production of the much-loved musical adventure will be screened in surround sound and in high definition. Captured live from the London Palladium, The Wind in the Willows stars Rufus Hound as the amazing Mr Toad, Simon Lipkin as Ratty, Craig Mather as Mole, Neil McDermott as Chief Weasel, Denise Welch as Mrs Otter, Gary Wilmot as Badger and the entire West End company.

Based on Kenneth Grahame’s treasured novel, The Wind in the Willows was brought to the stage by producer Jamie Hendry in a new musical adaptation with book by Academy Award-winning screenwriter and Downton Abbey creator Julian Fellowes and Olivier Award-winning composer and lyricist duo George Stiles and Anthony Drewe. 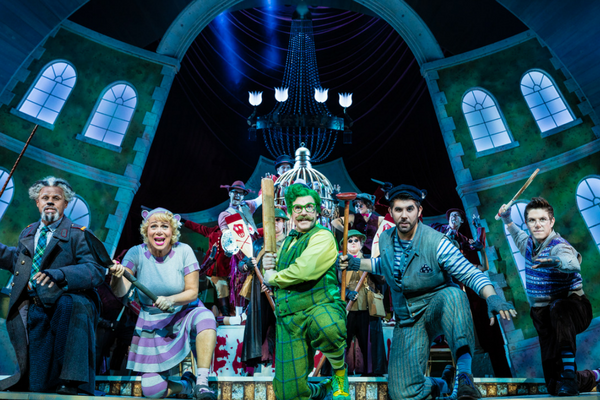 Rufus Hound is one of the UK’s leading actors, presenters and comedians, his theatre credits include Don Quixote (RSC) and the original West End production of Dirty Rotten Scoundrels (Savoy Theatre).

Denise Welch is best known for her television roles which include Coronation Street (ITV) and Waterloo Road (BBC). Theatre credits include Steel Magnolias (UK tour) and The Rise and Fall of Little Voice (Royal Exchange).

Gary Wilmot first rose to fame as a contestant on New Faces, with presenting credits since then including Showstoppers and So You Want To Be Top. His extensive musical theatre credits include Dirty Rotten Scoundrels (Savoy Theatre and UK Tour), Oklahoma! (UK Tour), The Pajama Game (Shaftesbury Theatre) and Chitty Chitty Bang Bang (London Palladium). He recently starred in Dick Whittington (London Palladium).

Simon Lipkin most recently starred in the world premiere of Nativity The Musical (UK tour) and the UK premiere of Honeymoon in Vegas at the London Palladium. His numerous other theatre credits include Avenue Q (Noël Coward), Rock of Ages (Shaftesbury/Garrick), I Can’t Sing! (London Palladium) and The Lorax (Old Vic).