The London Musical Theatre Orchestra (LMTO) is delighted to announce the cast for its much-anticipated Christmas concert: Alan Menken and Lynn Ahrens’ hit Broadway musical, A Christmas Carol, which runs for one night only at the West End’s Lyceum Theatre on 19 December 2016, marking the first time that the fully orchestrated score will be performed in London.

After decade-long success in New York, mounted each Christmas from 1994 until 2003 at New York’s Paramount Theatre in Madison Square Garden, A Christmas Carol comes to the London stage in glorious concert format for the very first time backed by the 32-strong London Musical Theatre Orchestra and performed by a star-studded West End cast.

This spectacular musical adaptation of one of Charles Dickens’ most famous stories gets the full Broadway treatment by the Broadway team of Alan Menken (Beauty and the Beast, Little Mermaid), Lynn Ahrens (Ragtime, Seussical) and Mike Ockrent (Crazy For You, Me and My Girl). Called by The New York Times “a tonic for adults, and for children a transfixing journey,” A Christmas Carol is the warm-hearted kick-start to the Christmas week for all the family.

During its run in New York, some of the biggest names in entertainment took on the central role of the ultimate Christmas killjoy, including F. Murray Abraham, Tim Curry, Jim Dale, Frank Langella and Roddy McDowell (in his final role). The production was adapted for television in 2004 with Kelsey Grammar as Scrooge and Jason Alexander as Jacob Marley. 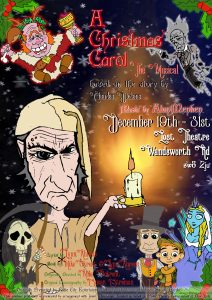 In keeping with the long term aim of the LMTO, its fully orchestrated concert of A Christmas Carol aims to not only make orchestral performances accessible to brand new audiences, but also to bring the exciting repertoire of musical theatre to a more classical audience. LMTO is the brainchild of Freddie Tapner, Musical Director and Founder of the ensemble. The orchestra is produced and managed by United Theatrical.

NOTE: This concert was originally programmed into the season for the Lyric theatre, but in order to present this concert production to its fullest orchestral capacity a creative decision was taken to move to the larger stage of the Lyceum. Anyone who purchased tickets for the Lyric has been contacted by their point of purchase with details of their re-allocated seats at the Lyceum

At the LOST Theatre

Co-directed by Lost artistic director Mark Magill and Martin John Bristow, with musical direction by Randy Smartnick, the Lost Theatre's full production of A Christmas Carol – The Musical will be staged over the holidays, running from 19 to 31 December with a press night on 21 December. The cast includes Piers Garham, Rebecca Westberry, Jessica Finn, Rachel Dobell, Michael Horowicz and Natalie Morgan.

A Christmas Carol - The Musical