Gareth Gates and Maureen Nolan will reprise their performances in FOOTLOOSE when it returns to London in September as part of its latest UK-wide tour. They'll be joined by a cast of #StageFaves, including Joshua Dowen in the lead as Ren McCormack, the role of the city kid who's just gotta dance, immortalised in the 1984 film by Kevin Bacon. And you can #GetSocial for all of them here...

Full casting is announced for FOOTLOOSE: THE MUSICAL, which launches anew next month following a smash-hit 2016 tour. Opening at New Wimbledon Theatre on Friday 21 April 2017, the tour will include a strictly limited West End season at the Peacock Theatre, playing for three weeks from Tuesday 12 September 2017.

Joshua Dowen will play Ren McCormack, the role immortalised on screen by Kevin Bacon. Joshua’s stage credits include Dogfight at Southwark Playhouse, Cool Rider at the Duchess Theatre and All or Nothing at the Vaults Festival.

They join the previously announced Gareth Gates as Willard and Maureen Nolan as Vi Moore. 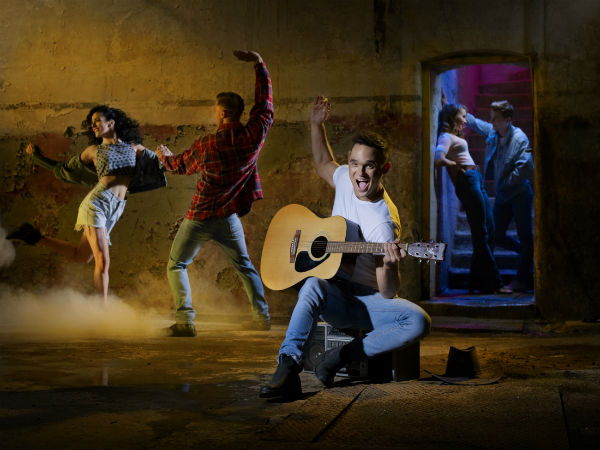 Gareth Gates as Willard in Footloose

Based on the 1984 screen sensation starring Kevin Bacon, FOOTLOOSE: THE MUSICAL tells the story of city boy Ren, who has to move to a rural backwater in America where dancing is banned. All hell breaks out as Ren breaks loose and soon has the whole town up on its feet. Featuring classic 80s hits including Holding Out for a Hero, Almost Paradise, Let's Hear it for the Boy and the unforgettable title track, Footloose: The Musical is set to take the world by storm once again, bursting with youthful spirit, dazzling dance and electrifying music.

When the film was released in 1984, it became the highest-grossing February release in US film history.  The soundtrack album ended the year-long reign of Michael Jackson’s Thriller at number one and went on to top album charts all over the world, eventually selling in excess of 17 million copies.  Footloose was nominated for a Golden Globe, and both the title song and Let’s Hear It for the Boy received Academy Award nominations. Footloose: The Musical first opened on Broadway in 1998 where it ran for 709 performances, with a London production following in 2006.

Gareth Gates rose to fame through the inaugural series of Pop Idol in 2001, going on to sell over 5 million records worldwide and have hits across the globe. His version of Unchained Melody sold over a million copies in the UK and is the 3rd best-selling single of the Noughties. Gareth is also the youngest ever-male solo artist to debut at number 1.  More recently Gareth has enjoyed a successful career on stage, with credits including Les Misérables, Legally Blonde and Joseph and the Amazing Technicolour Dreamcoat. In 2014 Gareth appeared in the final series of Dancing on Ice, and joined boyband 5th Story as part of ITV’s second series of The Big Reunion, touring arenas with bands including Blue and Five.  Gareth will not appear in Wimbledon and Chester.

Maureen Nolan has been singing with her sisters since she was nine years old, when they became one of Europe’s first girl bands, The Nolans. Best known for their smash hit single I’m in the Mood for Dancing, The Nolans enjoyed phenomenal record sales worldwide, and worked with some of the world’s most respected artists including Frank Sinatra. On stage, Maureen has played Mrs Johnstone in Blood Brothers in the West End and on tour to critical acclaim. She was the fourth Nolan sister to play the role, earning them entry into the Guinness Book of World Records. Other credits include Sadie in Girl’s Behind, Jill in Mum’s the Word and Sarah in The Naked Truth.

FOOTLOOSE: THE MUSICAL has music by Tom Snow and lyrics by Dean Pitchford, and is adapted for the stage by Dean Pitchford and Walter Bobbie. It is based on the original screenplay by Dean Pitchford. It is directed by Racky Plews (American Idiot, West End) with choreography by Matthew Cole, design by Sara Perks and musical supervision by Mark Crossland. It is produced by David Hutchinson and Phillip Rowntree for Selladoor Productions, Tristan Baker and Charlie Parsons for Runaway Entertainment, Jason Haigh-Ellery and Stephen McGill Productions. It is presented by arrangement with R&H Theatricals Europe.