How did your favourites fare in The Curtain Up Show's Album of the Year accolades? Only three could be named winners across the categories for Best UK Cast Recording, Best American Cast Recording and Best Non Cast Recording...

Winners have been announced for The Curtain Up Show Album of the Year 2016 in association with TodayTix. Over 13,000 votes were cast in the awards run by the weekly theatre chat show on Resonance FM.

The winners were revealed live on The Curtain Up Show on Resonance FM by Tim McArthur and Nathan Matthews, in the first episode of the weekly chat show’s 14th series.

“We’re delighted by the phenomenal response with the voting. It was hard enough whittling it down to just six nominees for each category, so we’re just glad that the final decision was left to our listeners. That’s the hard job!”

“The Best American Cast Recording category was also tough. Waitress was our favourite of all the shows we saw whilst recording in New York last year, and Sara Bareilles’ beautiful music has been captured perfectly on the Original Broadway Cast Recording. Fingers crossed we’ll be singing ‘Sugar, Butter, Flour’ in the West End soon!”

“We haven’t had the chance to see Hamilton on Broadway yet, but can’t wait for it to open at the Victoria Palace Theatre later this year! Lin-Manuel has assembled a wonderfully eclectic mix of artists for The Hamilton Mixtape, and reimagined the songs from his hit musical so we can enjoy them in a whole new way. He’s done the unthinkable, and managed to improve upon perfection!”

“We saw Kinky Boots on Broadway, and then again in London, and loved it equally on both sides of the Atlantic! It’s a fabulously feel-good musical with a wonderful message of acceptance.”

Tony Award winner Jessie Mueller will give her final performance as Jenna in Waitress at the Brooks Atkinson Theatre on Broadway on 26 March. The show, which features music and lyrics by Grammy Award nominee Sara Bareilles, is rumoured to be opening in London later this year.

The Hamilton Mixtape features reimagined versions of the songs from Lin-Manuel Miranda’s hit musical by stars such as Sia, Queen Latifah, Alicia Keys, Kelly Clarkson, John Legend and Usher. Tickets for the London production of Hamilton, which is set to re-open the Victoria Palace Theatre in November, go on sale on 30 January. 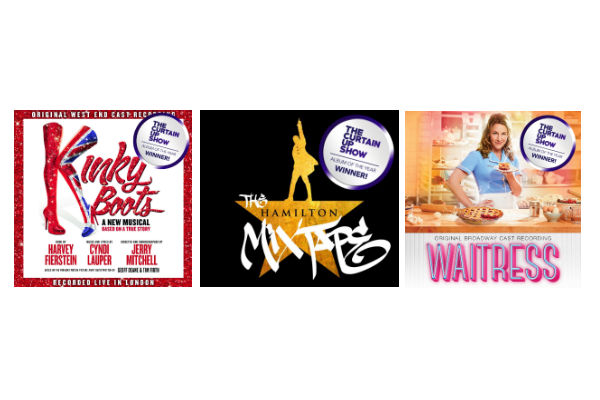