The National's revival of Sondheim's FOLLIES gets three big nods in this year's Evening Standard Theatre Awards shortlists, announced today. And seven shows, including two from the Menier Chocolate Factory, are named for audience voting for Best Musical...

The London Evening Standard today (17 November 2017) reveals the shortlists for the 2017 Theatre Awards, for which winners are announced in a ceremony at the West End's Theatre Royal Drury Lane on Sunday 3 December 2017.

The National's revival of Sondheim's Follies get the most nominations amongst musical productions - Best Performance in a Musical (for Janie Dee), Best Director (Dominic Cooke) and Best Musical.

The last is the Evening Standard category, co-sponsored by BBC Radio 2 and ultimately decided by the public. The six other shows shortlisted for audience voting are: She Loves Me and The Secret Diary of Adrian Mole, both seen at the Menier Chocolate Factory and, from the West End, An American in Paris, Bat Out of Hell, Dreamgirls and School of Rock.

In the single dedicated performance category for musicals, Janie Dee competes with An American in Paris' Robert Fairchild and Dreamgirls' Amber Riley. Elsewhile, Girl from the North Country's Sheila Atim is shortlisted for Emerging Talent.

Bat Out of Hell gets a second nod for Best design, up against designers for various play productions.

The ceremony for the annual awards, marking their 63rd year, will be co-hosted by the newspaper’s owner, Evgeny Lebedev, American Vogue editor-in-chief, Dame Anna Wintour, star of stage and screen Cate Blanchett and Hamilton creator and original star Lin-Manual Miranda. The onstage host for the evening is Phoebe Waller-Bridge.

All new productions and performances on the London stage that opened between 17 October 2016 and 19 October 2017 were eligible for consideration for this year’s Theatre Awards. 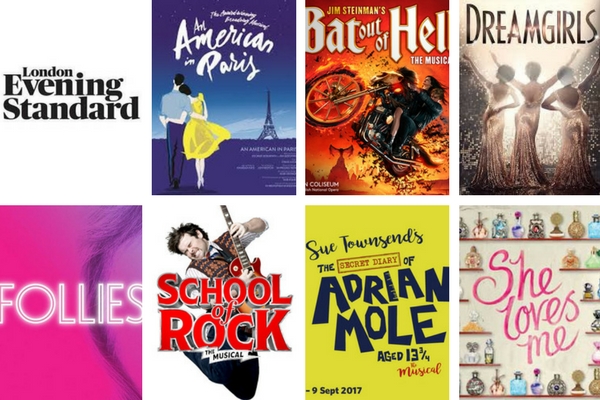 Audience Award for Best Musical (voted by the public)

The Secret Diary of Adrian Mole