Are you ready to make a wish? We're wishing we can be at the Dominion Theatre for the West End premiere of BIG THE MUSICAL, starring Jay McGuiness! Watch the trailer and check out more photos from the show here...

Based on the smash-hit movie starring Tom Hanks, BIG The Musical makes its West End premiere at the Dominion Theatre for a strictly limited nine-week season from 6 September to 2 November 2019, with a Gala Night in aid of Make-A-Wish on Tuesday 17 September.

BIG is a joyous, heart-warming musical about 12-year-old Josh Baskin who longs to be big.  When a mysterious Zoltar machine grants his wish, he finds himself trapped inside an adult’s body and he is forced to live and work in a grown-up world, but his childlike innocence has a transforming effect on the adults he encounters.

Jay McGuiness will reprise his role as Josh Baskin, the role immortalised in the 1998 film by Tom Hanks. McGuiness originated the role in the musical’s UK premiere at the Theatre Royal Plymouth in 2016.

Jay came to fame as part of the successful boy band The Wanted. His fame widened when he won Strictly Come Dancing in 2015 with professional dancer Aliona Vilani. He and fellow bandmate Siva won last year’s celebrity version of Channel 4’s Hunted, raising money for Stand Up To Cancer.  Jay is also a regular contributor to the BBC’s The One Show and is currently starring in Rip It Up – The 60’s in London’s West End until June.

Based on the Twentieth Century Fox Film BIG written by Gary Ross and Ann Spielberg, BIG The Musical will be produced in London by Michael Rose, Damien Sanders and Paul Gregg for Encore Theatre Productions Limited

For more shots from the 2016 run at Theatre Royal Plymouth plus artwork for the West End transfer, see our full gallery on the show's #StageFaves page. 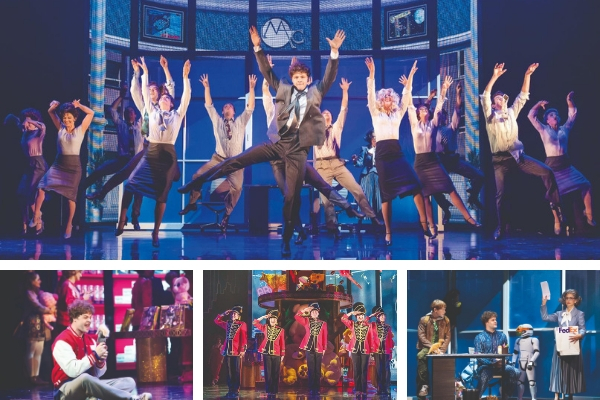