Gone are the days of going to a show in a ballgown or top hat and tails, but should they make a comeback? Musical Theatre Appreciation Society's Willy Mukendi-Wood discusses the members' opinions...

A recent post on our Musical Theatre Appreciation Society Facebook page, not criticising, but merely expressing an opinion of disappointment in the lack of traditional attire, has inspired a light debate.

What do I think? If the rules that defined traditional theatre were never broken, we wouldn’t have some of the musicals we have today. Take Hamilton as a prime example - rap, in a musical, being this successful? Who would have predicted that? Not only are musicals becoming more diverse in their form and in the execution of their conten,t but as a result so are the audiences being drawn in. Theatre is now more expressive, accessible, dangerous, sexy and exciting, which for me is directly correlated to the audience members showing up.

I personally do not believe that dressing up for a performance shows respect to a performer, no more so simply than turning up and filling seats. Whether you’re sat upright draped in gold finery and sipping on champagne, or whether you’re slightly slouched in a tracksuit, at least you showed up. As long as you remain respectful to the performers by exercising basic theatre etiquette (check out our feature on Silent Snacks to hear our thoughts on munching and crunching), who cares what you wear? There are more important ways to show respect to a performer than dressing up in my opinion - being engaged, clapping, perhaps even a standing ovation if you feel it is warranted.

Some members of our group felt that making a physical effort of looking nice showed respect to the performers, whereas others expressed a more carefree attitude: 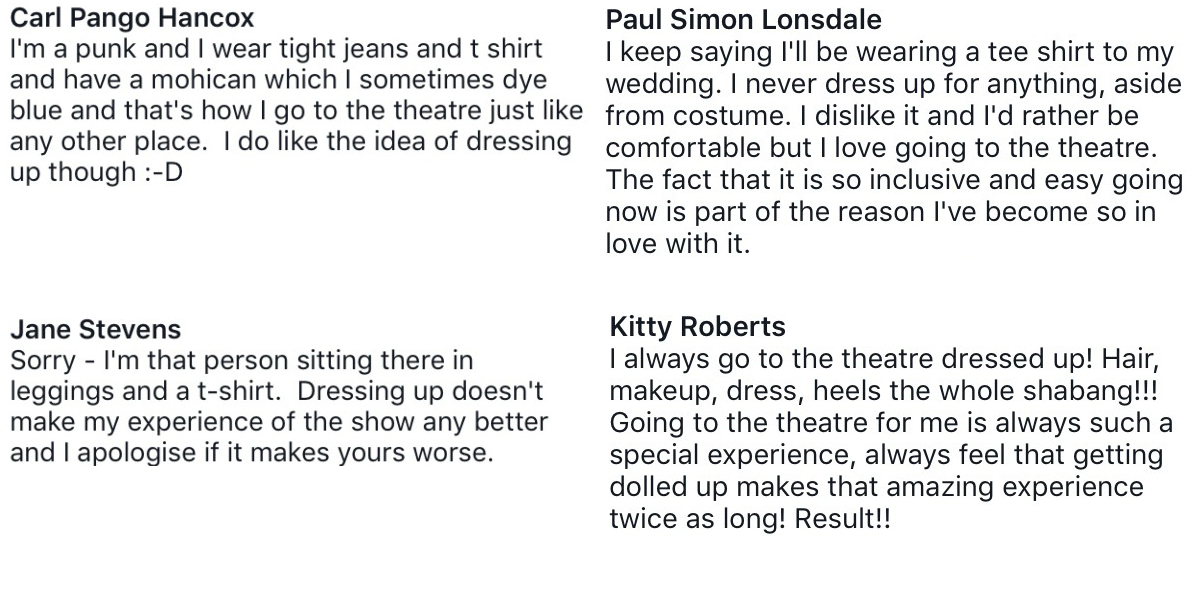 Now don’t get me wrong - this article is not an attempt to suggest that you shouldn’t make the effort if you want to. By all means if you want to dress up, dress up. Some of our members have even mentioned gaining special attention from the performers at stage doors because of their dressy attire and I think that’s great. My issue lies not with an individual who dresses up, but with an individual who shines light on those who dress down.

One of the things I personally love about theatre is how welcoming it is. Theatre by nature is filled with the most expressive individuals who have never felt more at home on or behind a stage. I attended theatre school and before I started I had this sinking feeling that the college would be a commercial photocopier - I imagined I would be taught how to fit in. With my huge hair, huge glasses and thick lenses aiding my terrible eye sight, I stand out. Thankfully, within just moments of my first day there I knew that all of my own quirks were not only appreciated but encouraged.

There are some occasions where I know the majority of audience members will dress up for, press nights and anniversaries to name a few, and I too make a special effort for these nights. I recognise it as a special occasion and so make the choice to mirror that in my attire. Of course you could counteract my argument by suggesting that I don’t recognise the importance of every show - I do. But if I was a performer I would prefer to look out in the audience and see diversity and expression, isn’t that what the whole industry is about?

If you want to dress up to the theatre, please do. I often see people dress up and of course can appreciate their efforts. But if you don’t want to dress up, don’t make excuses for it. The only thing that saddened me about this Musical Theatre Appreciation Society Facebook thread was with people feeling they had to justify why they weren’t dressing up. Please don’t feel the need to say you were working or you didn’t have time. You are a paying customer coming to see a show… You owe no explanation.