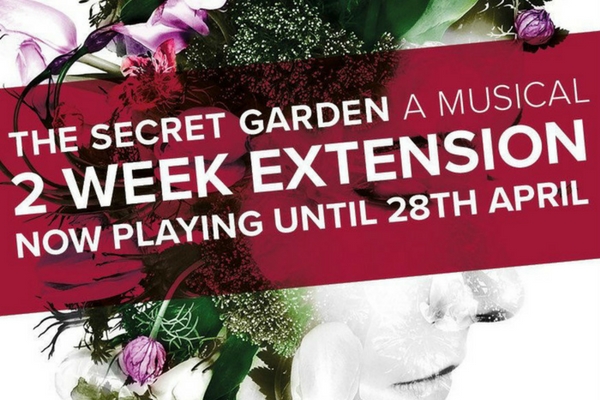 Theatre worth travelling for indeed - and now you have an extra fortnight to make your travel plans. Dominic Shaw's actor-musician interpretation of THE SECRET GARDEN is now booking at Cirencester's new Barn Theatre until 28 April 2018. Watch this brilliant video about audiences' reactions to this stunning venue and production - see if you can spot our own Perry O'Bree!

Due to popular demand, the Barn Theatre’s inaugural production of THE SECRET GARDEN, based on the 1911 book by Frances Hodgson Burnett, has added two further weeks to its limited season at the new, state-of-the-art venue in Cirencester in the heart of the Cotswolds. It's now booking until 28 April 2018 - and, psst, there will also be a special post-show Q&A with director Dominic Shaw and the cast as well as artistic director Iwan Lewis after the show next Saturday 14 April, chaired by Faves founder Terri Paddock.

A powerful story about one small orphan girl shining hope into the desolate lives of her new-found relatives. Challenging, moving and inspiring for all ages.

After losing both parents to cholera in India, young Mary Lennox is sent to England to live with her hermit uncle, Archibald Craven. Inside his haunting secluded house, Mary meets his bedridden son, Colin, all alone with his mother’s death on his conscience. Everything changes when Mary decides to revive the beauty of her Aunt Lily’s overgrown secret garden.

The Secret Garden has script and lyrics are by Pulitzer Prize-winning playwright Marsha Norman with a score by Lucy Simon. The musical originally premiered on Broadway in 1991, going on to win three Tony Awards.

Check out the show's #StageFaves page for full social media for the show, theatre and cast - as well as Perry's #FirstNightTakeover, show photography and further videos and coverage.

There are tons of West End and telly stars, local big-wigs and StageFaves' own Perry O'Bree captured in this Barn video celebrating the theatre and the production's opening! See who you can spot.