WE SENT THE LOVELY PERRY O'BREE DOWN TO PRESS NIGHT OF EXPOSURE AND HE CAPTURED THE AMAZING EVENING FOR US ON OUR TAKEOVER BLOG!

CHECK IT OUT HERE! 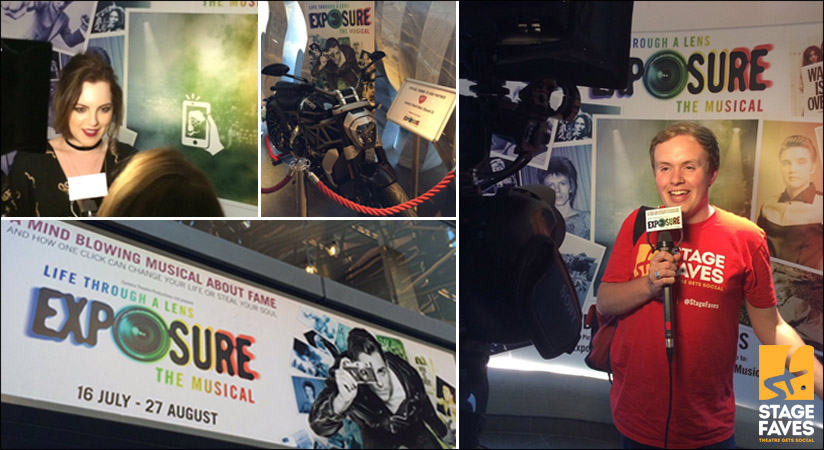 27 Aug 16
Suggest Updates to This Profile

WE SENT THE LOVELY PERRY O'BREE DOWN TO PRESS NIGHT OF EXPOSURE AND HE CAPTURED THE AMAZING EVENING FOR US ON OUR TAKEOVER BLOG!

CHECK IT OUT HERE!

The official Twitter account of the most exciting new musical Exposure. Ever taken a photograph? Yes, then this mind blowing piece could steel your soul.
Tweets by @ExposureOnStage

Exposure The Musical - Life Through a Lens

The book for this new musical was written by Mike Dyer, with Quentin Russell as script consultant and dramaturgy by Phil Willmott, who is also directing this World Premiere. Mike Dyer has also written the lyrics & music with co-writers Philip Cohen, Vince Hudson, Fred Johanson, Clayton Moss, Sara Eker Peller, Mark Street and Adrian Wyatt. Exposure The Musical has a unique partnership with Getty Images, enabling the production to feature iconic and compelling imagery from one of the world’s most remarkable collections.

Young photographer Jimmy Tucker faces the biggest and most exciting challenge of his life when a stranger commissions him to find and shoot the seven deadly sins alive and kicking in modern London.

But in a break-neck race through the night, a series of extraordinary encounters involving girlfriends, family history and the intoxicating cult of celebrity begin to reveal that there's a whole lot more at stake than just money.

Weaving a breathtaking, contemporary score around a dazzlingly witty portrait of the price of fame, EXPOSURE is an electrifying and brilliantly original new musical that will capture your heart…and just maybe your soul.

Exposure The Musical – Life Through A Lens is produced by Camera Theatre Productions Ltd.

Mike Dyer (Book, Lyrics & Music) has extensive experience in the music industry both as a performer and writer. He has toured the world as a singer with his own bands Tokyo and Rhode Island Red, performing with world class acts including Thin Lizzy, Iron Maiden, Bon Jovi, Red Hot Chilli Peppers and Black Sabbath. As a writer he has worked with star names including Diana Ross, Huey Lewis and Eric Clapton. He played the Narrator in the multi-award winning musical Blood Brothers, with further stage work including Jesus Christ Superstar (Pilate/Caiaphas) and Notre Dame de Paris (Frollo/ Quasimodo). Mike is also known for playing Casey Hogan, in EastEnders.

Phil Willmott (Director/Dramaturg) is a multi-award winning director, artistic director, playwright, composer, librettist, teacher, dramaturg, arts journalist and actor. He has worked in theatres across the world on everything from classical drama, musicals and family shows to cabaret and cutting edge new writing including notable productions at Liverpool Everyman and Playhouse, Sheffield Crucible, The National Theatre Studio, Nottingham Playhouse, in the West End and for ten years as an associate artist at B.A.C. He is Artistic Director of his own multi award winning theatre company The Steam Industry (incorporating The Finborough Theatre and The Scoop amphitheatre on the South Bank) and also works as a broadcaster, arts journalist, playwright, lyricist and composer. He’s been a recipient of a Peter Brook award for innovation and entertaining theatre for his classical and family shows, a UK Theatre Award for outstanding musical production, WhatsOnStage award nominations for best regional and Off West End productions, a Brooks Atkinson/Royal Court award in New York for playwriting and 4 Spirit of Broadway Awards. Our #FirstNightTakeover series continues with Perry O'Bree attending the world premiere of EXPOSURE THE MUSICAL - Life Through a Lens at the St James Theatre. This new photo-mad musical, supported by Getty Images, is written by Mike Dyer with a cast including Michael Greco, Natalie Anderson, Niamh Perry and, in the starring role as a young photographer on a dangerous commission to shoot the seven deadly sins, David Albury...

The world premiere of Exposure The Musical – Life Through A Lens will run at London&#8217;s St James Theatre, for a limited season, from 16 July until 27 August 2016, with press night on Thursday 28 July 2016. The book for this new musical was written by Mike Dyer, with Quentin Russell as script consultant and dramaturgy by Phil Willmott, who is also directing this World Premiere.