With the Broadway smash hit Hamilton coming to the West End, a white actor has been cast into one of the previously black roles. Is this right? Musical Theatre Appreciation Society's Willy Mukendi-Wood discusses Colour Blind vs. Copycat casting...

It is quite literally casting without the additional factor of ones complexion baring any significance to the casting decision.

Sounds pretty simple, but when added to our crazy world of jazz hands and step ball changes it becomes a little more complex.

Let’s start with a popular debate going on at the moment. Should Sam Mackay be cast as Hamilton or should this role be reserved for a POC (person of colour):

Following the debates on MTAS facebook page... Who should play A.Hamilton

This subject has caused quite a stir with Mackay fans, promoting his rap ability and fantastic stage presence, whilst #teampocforham can not and will not accept Hamilton being played by a white male. As for me? I fall in the third group of people who feel divided.

As a POC myself shouldn’t my loyalties be to other POC performers who struggle to grab roles in general?

As a Mackay fan who has witnessed his talent several times as Usnavi (In The Heights), I can't deny that he is more than capable. But is capability enough? Or does it somewhat diminish a level of respect for POC performers, who have been waiting for lead roles such as Hamilton for a long time? 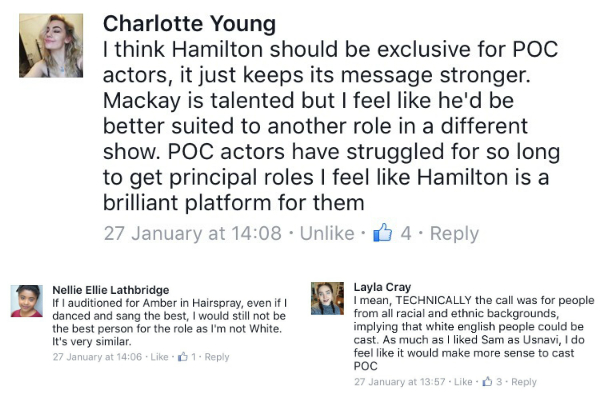 Although I no longer have interest in being a performer, growing up I definitely did. It was through amateur dramatics and watching musicals from a young age that I learned how little Black people landed lead roles.

Did this mean Black people weren’t as good as performers?

Or were we entering this imitation complex where cast changes would see similar looking people taking over from originals?

Now I am more than aware of cast typing and familiar with a casting director's wish to stick to a vision. However, if the story is not centred on race or creating an illusion of an area where only a particular complexion would derive from, surely a director's vision should be based on talent and not skin.

Perhaps this mentality is stimulated from the movie to musical craze. You see a role on TV and assume that once it transfers to the stage the role must look exactly like the TV actor. Just ask yourself how many people were shocked by a black Annie in the 2014 film adaptation. 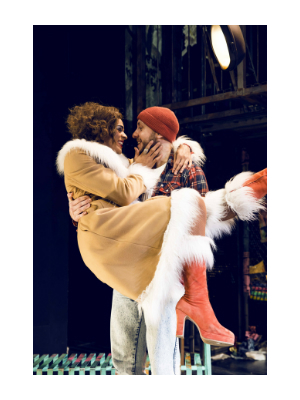 If I would indulge you with a few more examples. Let’s take the current touring production of Rent (reviewed previously by myself for Musical Theatre Appreciation Society). Typically the role of Tom Collins has always gone to a black male, but this production sees the very talented Ryan O’Gorman (with a voice that could cure the sick) playing this role. O’Gorman is very much a white male - despite there being no reference to Collins' background, because of this imitation complexion and our content nature with copycat casting, I imagine many people expected a black Collins.

Bringing it back to Hamilton, I’ve engaged in chat where people have said,

“I knew Cleve September would be John Laurens/Phillip because he looks like Anthony Ramos”.

These are all examples of us (sub)consciously wanting to recreate similar, familiar images for comparable situations. However with this mentality do we somehow limit our own creativity? What would happen if a voice like Beverley Knight took on the iconic Elphaba from Wicked? Would her sound be too unique? Or would the unique tone of her voice become as iconic as the character itself?

There are certain vocal tones that different skin colours tend to have. Perhaps I sound crazy, but why deny that you can close your eyes and attribute the sound/ tone of someone's voice to the colour of their skin? With that in mind, Elphaba is quite literally green and could therefore be played by any colour. Yet the ratio of White Elphaba’s to POC is unshakeable. In fact I believe there has only ever been one black Elphaba (Alexia Khadime). Could this be to create a particular musical sound? Or could we quite literally indulge in imitation when the end result is lathered in green?

There are some musicals such as Hairspray where skin colour is essential to the story. I completely agree with a distinct and structured cast type for these musicals. But many musicals do not. I personally advocate colour-blind casting. I want to see an equal mixture of all backgrounds on stage; emphasising equal opportunity. 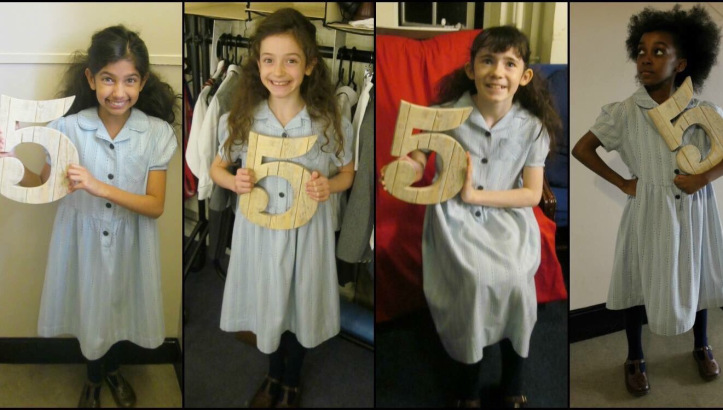 The leading girls of Matilda